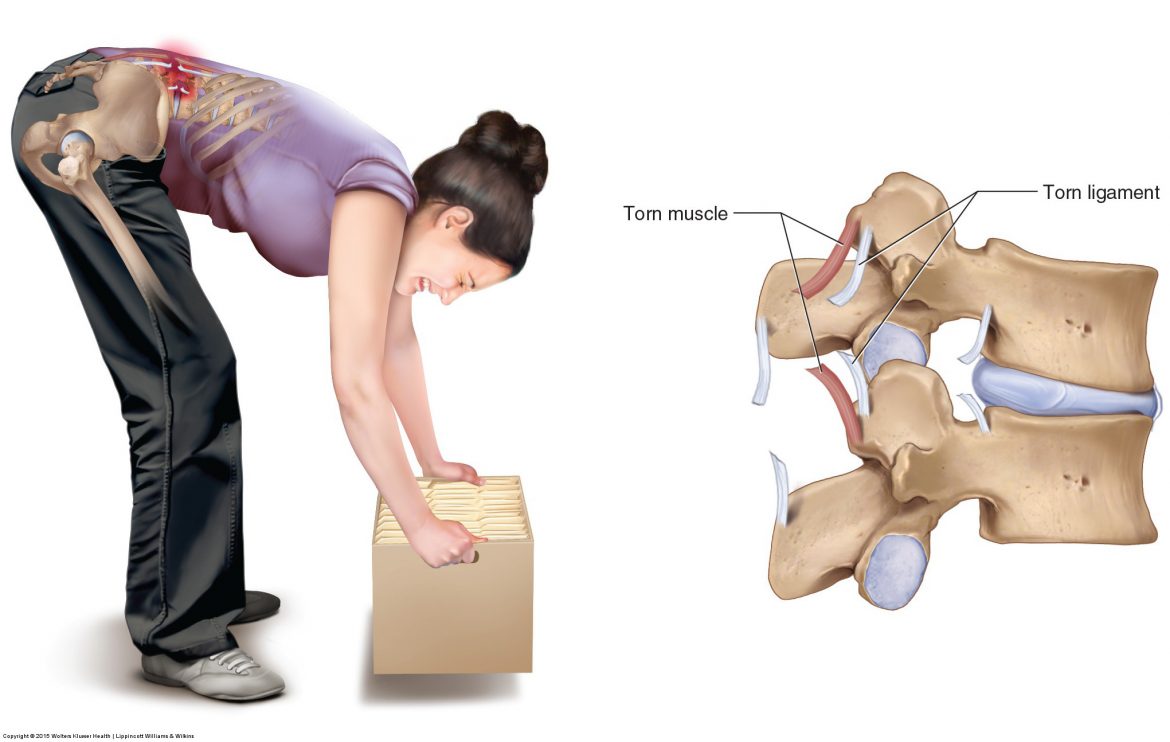 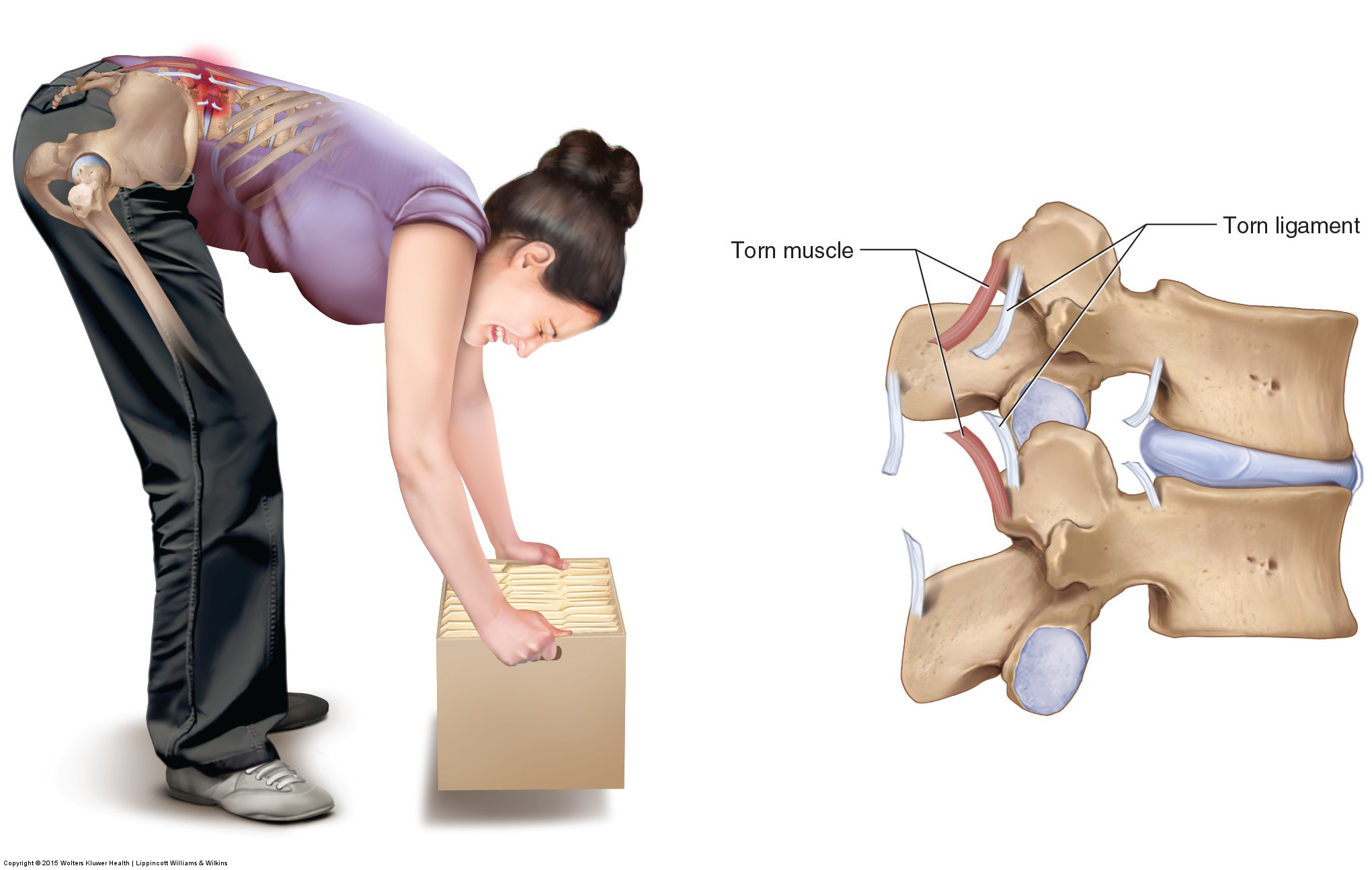 Bending forward to pick up an object is a common cause of low back sprain and/or strain. Permission: Joseph E. Muscolino. Manual Therapy for the Low Back and Pelvis – A Clinical Orthopedic Approach (2015).

Low back strains and sprains are extremely common because of all the bending and lifting that we do. A low back sprain or strain can involve the lumbar spinal joints and/or the sacroiliac joints (SIJs). A strain is defined as tearing of muscular (myofascial) tissue and a sprain is defined as tearing of ligamentous tissue (including joint capsule and other fascial tissues). Very often, the trauma that causes one will cause the other and the client/patient will present with an injury that is both a strain and a sprain. Generally, it is usually paraspinal musculature (erector spinae and transversospinalis) that tears with a low back strain. Low back sprains involve the ligaments and joint capsules of the lumbar spine as well as the ligaments of the SIJs. Because the SIJ is heavily ligamentous, it is more often sprained than strained.

The two most common causes for a low back sprain / strain are macrotrauma and repetitive microtraumas. Most often, these traumas involve bending and lifting. When we bend over, the center of gravity/weight of our trunk becomes imbalanced anteriorly and our trunk would fall into flexion if it were not for our posterior paraspinal extensor musculature contracting with a force of extension to counter the flexion force of gravity. Unfortunately, because the paraspinal muscles are so close to the axis of motion of the spine, they have very poor leverage force and have to contract strongly to counter gravity. If their contraction force is too great, they might tear, resulting in a low back strain. If we pick up an object, the weight of the object adds to the force of our paraspinal contraction and the likelihood of a strain. And the farther away from our body that we hold the object, the increased leverage force and even greater chance of straining paraspinal muscle tissue.

Add to this concept the fact that as we bend farther into flexion, our paraspinal musculature is increasingly stretched longer, decreasing its ability to create tension force when contracting due to the length tension relationship curve (when muscle tissue is stretched, it can form fewer myosin-actin cross-bridges because some of the active sites of the actin filaments are out of reach of the myosin heads). Therefore, the farther we bend forward, the weaker our paraspinal muscles become, increasing the chance that they may be unable to generate enough strength to counter the gravity force of the forward body plus the weight being held. If they cannot counter this force, they might tear and the client/patient will experience a low back strain.

A low back sprain of ligamentous tissue occurs in a similar manner in that posterior ligamentous fascial tissue is also responsible for countering the force of gravity acting on our forward body weight along with any object being held. However, ligamentous tissue counters the flexion force “passively” (versus the active tension of sliding filament muscle contraction). As with muscle tissue, the heavier the object held and the farther away the center of gravity of the body plus object is, the greater force that is placed on the ligamentous tissue. The major difference is that ligaments tend to exert their force near or at the end of passive range of motion of the joint(s). Therefore, low back sprains tend to occur when we are bent far over. This is compounded by the fact that, as stated, muscles become increasingly weaker as we bend farther over, shifting more of the burden of countering gravity to the ligaments. Therefore, when a person bends over and their back “goes out,” assuming that soft tissue tearing occurred, strains tend to occur higher in the bend and sprains tend to occur lower in the bend.

The major reason why it is recommended to perform a squat bend “with the knees” (as opposed to a stoop bend wherein the back is rounded) is that it keeps the center of gravity of our trunk closer to the spine, decreasing the tension force upon our low back paraspinal muscles and ligaments. Squat bending also keeps our spinal joints in extension, which is a more stable closed-pack position.

Repetitive microtraumas are not as dramatic toward causing a low back strain or sprain, but may be just as important. Repeated bending and lifting can cause wear and tear of the posterior paraspinal musculature and ligaments, gradually damaging and weakening them. Often, it is a macrotrauma that follows long-standing repetitive microtraumas that is the proverbial “straw that breaks the camel’s back” and causes a low back strain and/or sprain.

Note: Technically, a strain is defined as tearing of muscular tissue; but this term is often applied to muscle spasming, even if there is not tearing. Although even here, it could be argued that muscle spasming may involve some micro-tearing, which technically is tearing of tissue.