Attachments and Actions of the Palmar Interossei

The palmar interossei (PI) are a group of three intrinsic hand muscles, which, as their name implies, are located between (metacarpal) bones in the palm of the hand (Figure 1). Each one crosses the metacarpophalangeal (MCP) joint to attach distally onto the proximal phalanx of a finger on the side of the phalanx that is oriented toward the middle finger. For this reason, each one pulls its respective finger toward the middle finger, which is the reference line for abduction/adduction of the fingers; hence the PI adduct fingers at the MCP joints. They are named #1, #2, and #3, from radial to ulnar. Palmar interosseus (PI) #1 attaches from the second metacarpal to the index finger; PI #2 attaches from the fourth metacarpal to the ring finger; and PI #3 attaches from fifth metacarpal to the little finger. 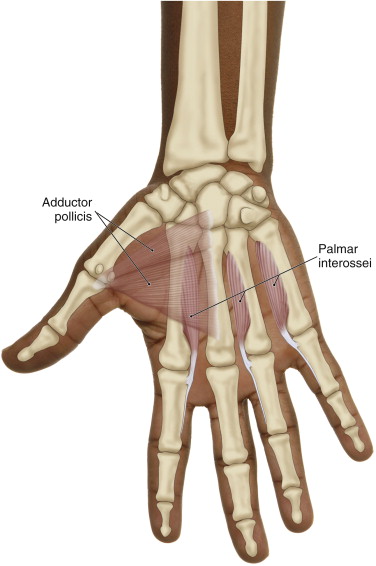 Palpation Assessment of the Palmar Interossei

Although the PI are a bit deep, they are easy to palpate and assess. To palpate and discern PI #1, simply place your palpating finger pads between the second and third metacarpals on the palmar side, with pressure oriented toward the second metacarpal, and ask the client to adduct the index finger toward the middle finger against the resistance of a pen or marker that is placed between the two fingers. The first PI will clearly be felt to engage (Figure 2A). Palpate the entirety of the muscle as the client gently contracts and relaxes it. Once located, moderate to deeper pressure can be applied to work the muscle. A similar procedure can be used to palpate PI #2 and PI #3 (Figure 2BC).

The PI muscles perform adduction of their respective fingers. In addition, because they cross the MCP joints slightly anteriorly, they can also flex the fingers at the MCP joints. Therefore, to stretch the PI, the index, ring, and little fingers need to be abducted (away from the middle finger) and extended at the MCP joints (Figure 3).

Carrie was a 30 year-old yoga instructor who developed pain in the palm of her left hand. There was no precipitating trauma; the pain began insidiously and gradually increased until she could no longer bear any weight on her hand. Poses such as downward facing dog became impossible. Before coming to my office, Carrie consulted three health professionals, a massage therapist, a chiropractor, and an orthopedic surgeon specializing in hand surgery. The massage therapist told her that trigger points in her left shoulder were the cause of the pain. The chiropractor told her that neck joint subluxations (dysfunctions) were the cause. And the orthopedic surgeon ordered an X-Ray and told her that the saddle (first carpometacarpal) joint of the thumb was too lax and that surgery would be needed to stabilize the joint and alleviate the pain. Soft tissue manipulation to the shoulder region by the massage therapist and joint manipulation (adjusting) of the neck by the chiropractor did not help to diminish her hand pain. And Carrie opted to not have the surgery recommended by the orthopedic surgeon.

Carrie then presented to me. After I exhausted all the usual suspects, spending well over an hour on history and exam, I finally arrived at her hand, where I palpated and found a hypertonic PI #1 muscle, that when pressed into, immediately reproduced her characteristic pain. Carrie had a spasm of her first PI muscle. No fancy referral patterns or pinched nerves were involved. She had a simple tight muscle in her hand that none of the other professionals had even tried to look for, even though it was exactly at the site of the pain that she was experiencing. Moist heat, soft tissue manipulation, and stretching fully resolved her condition in only a few visits. Who was the overlooked unusual suspect? The first palmar interosseus muscle!

Note: This blog post article is the second in a series of 8 posts on