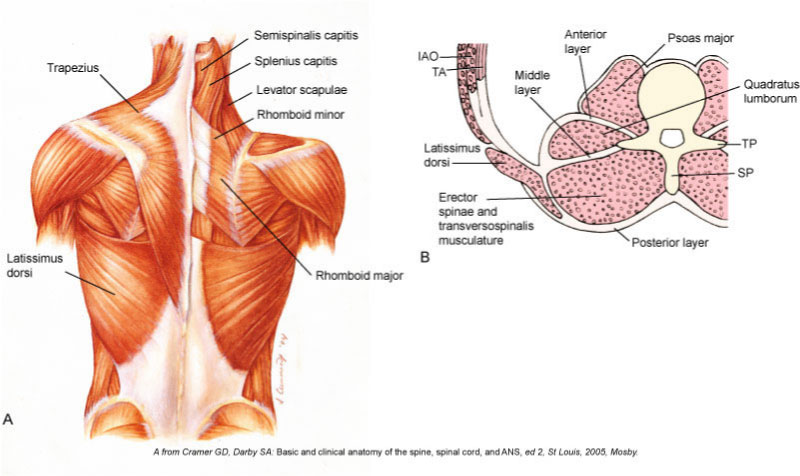 In the past few years, the lumbodorsal (thoracolumbar) fascia has been proposed as one of possible sources of “idiopathic low back pain” (pain that is stated as having no known cause). Authors Jan Wilke, Robert Schleip, Werner Klinger, and Carla Stecco wrote a review in Biomed Research International investigating the possible role of the lumbodorsal fascia in patients with low back pain, with special focus on combining findings from histological studies and experimental research.

From published research, the authors found that:

Figure 1. Two of several possible scenarios in respective cases of fascia-generated low back pain. (1) Microinjuries and/or inflammation and resulting irritation of nociceptive pain nerve endings in lumbar fascia may directly induce back pain, accompanied by a sensitization of fascial nociceptors. (2) tissue deformation due to immobility and/or injury may impair proprioceptive signaling. This induces a sensitization of fascial nociceptors, which then alters the functioning of related neurons in the spinal cord to respond more strongly to potential nociceptive signaling, even mild stimulation. (From Wilke et al., 2017)

(2) tissue restructuring, for example following immobility, chronic overloading, or microinjury, may compromise proprioceptive signalling, which by itself could decrease the pain threshold by means of an activity-dependent sensitization of wide dynamic range neurons (Figure 1)

Figure 2. In a third scenario for fascia generated low back pain (3), irritation of other tissues—such as muscle fibers, facet joint capsules, spinal nerve roots, or the annulus fibrosus of the discs—could elicit an increased sensitivity in the lumbodorsal fascia innervated by the same segmental level of the spinal cord. The increased sensitivity of fascial nerve endings would then lead to nociceptive signaling, even in response to mild stimulation. (From Wilke et al., 2017.)

(3) nociceptive input from other tissues innervated by the same spinal segmental levels could elicit an increased sensitivity in the lumbodorsal fascia (Figure 2).

And, of course, various combinations of these three processes are possible.

All too often, the medical / allopathic world ignores the contribution of extra-articular myofascial tissues to low back and other pain and dysfunction syndromes. Consequently, if no osseous structural damage is found on radiographic examination (x-ray) and no annular disc damage is seen on MRI examination, the patient’s / client’s pain is often described as idiopathic, in other words pain from an unknown origin (the word root “idio” comes from the same origin as the word “idiot”, in other words, not knowing). Myofascial dysfunction is essentially impossible to diagnose/assess without direct manual and movement assessment techniques such as soft tissue palpation and stretching length assessment. For this reason, medical practitioners usually miss myofascial dysfunction. Instead, manual therapists are ideally suited to assess myofascial dysfunction.

For manual therapists this article supports the long held assumption that at least some cases of low back pain may originate from the lumbar fascia. The reduced shearing mobility of the lumbar fascia seems to play a central role in these cases. Since this will tend to reduce proprioceptive signaling from the lumbar fascia, it should be beneficial to include manual techniques in the treatment of low back pain patients which involve horizontal tissue traction (parallel to the skin) rather than only vertical compression.
Another conclusion for many low back pain cases will be that a myofascial treatment focus on superficial tissue layers may often be more efficient that a focus on deeper tissues. Working with the patient in a prayer position (child’s position in yoga) or similar, in case that is easily possible, can be good way to direct the manual deformation mainly towards the then pre-stretched lumbar fasciae on the surface, while having the deeper muscle fibers in a relatively relaxed state. No wonder that this position is frequently included in most fascia oriented yoga styles, but also in the Rolfing method of myofascial integration.

Note: This blog post article was created in collaboration with TerraRosa.com.au.