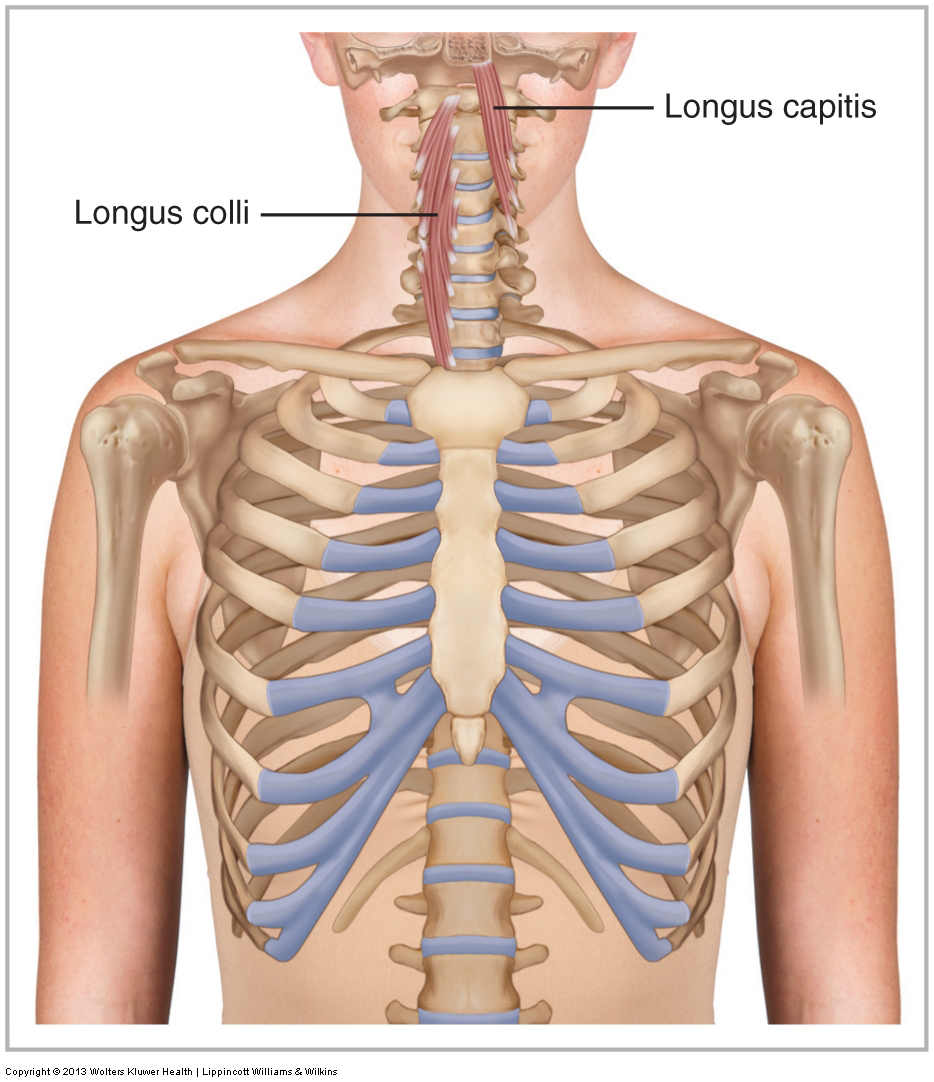 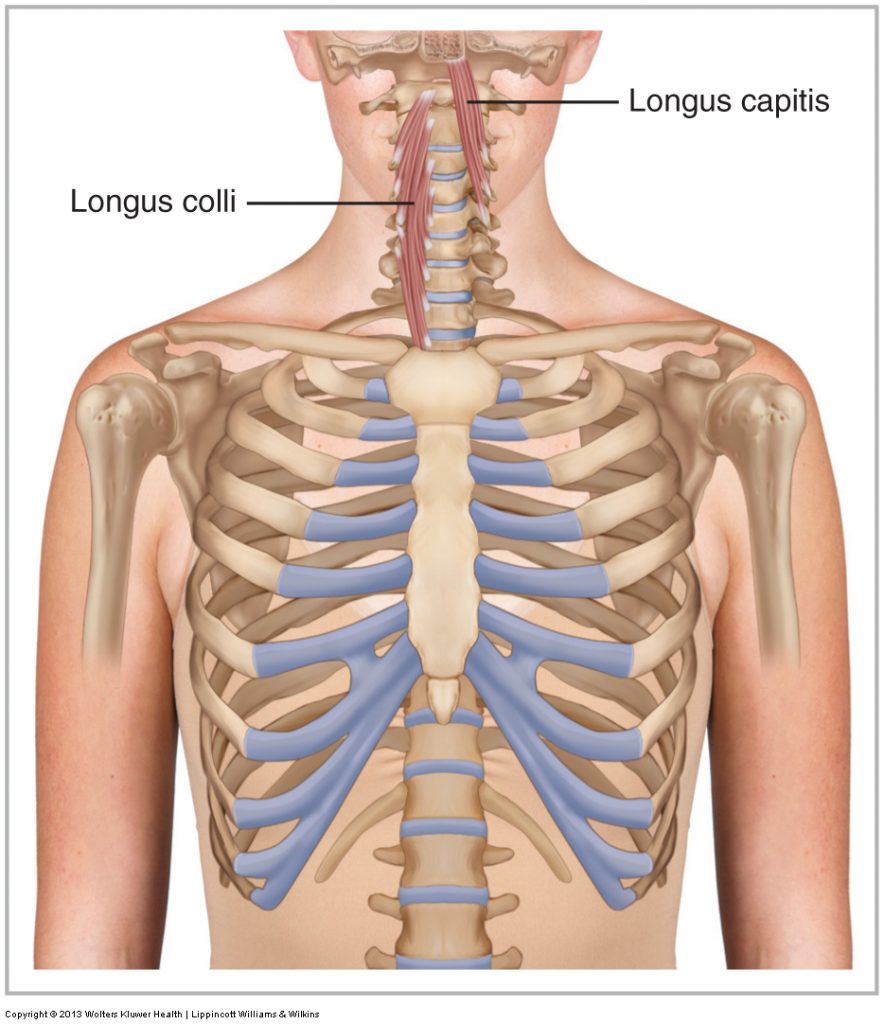 Anterior view of the longus colli on the right and the longus capitis on the left. Permission Joseph E. Muscolino.
Advanced Treatment Techniques for the Manual Therapist: Neck (2013)

The longus colli and longus capitis are two small muscles spanning multiple cervical motion segments and located deep in the anterior neck, lying against the cervical spine’s anterior bodies and transverse processes. These muscles are often termed the ‘deep cervical flexors’, and are proposed to play a role in stabilizing the cervical spine. Dysfunction of these muscles has been shown in whiplash and chronic neck pain utilizing the cranio-cervical flexion test (CCFT).

The CCFT involves a small controlled nodding action performed in supine with the cervical lordotic curve supported by a blood pressure cuff that is pumped up to 20mmHg (of mercury). The patient is then asked to perform a slight (flexion) nod of the head/neck, pressing down against the blood pressure cuff until the pressure increases to 22 mmHg and then hold this position for 10 seconds, followed by 10 seconds of rest. This procedure is repeated to 24mmHg, 26mmHg, 28mmHg, and then 30mmHg pressure in the cuff. In each repetition, the patient’s deep flexor musculature (longus musculature) must engage to press down against the cuff to increase and then maintain the increased pressure. Therefore, this test is used to determine the the engagement of the longus colli and capitis in stabilizing the cervical spine.

Post whiplash and/or chronic neck pain, during the CCFT, the longus muscles are shown to have reduced activity, coupled with an increase in sternocleidomastoid activity. Failure to maintain stabilization of the cervical spine during CCFT has led to the development of targeted rehabilitation stabilization exercises for the longus musculature. However, it is not clear if these muscles are anatomically or biomechanically suited to a stabilizing role.

Researchers from University of Otago in New Zealand published a study in Musculoskeletal Science and Practice which describes the fascicular morphology of the longus capitis and colli, and estimates their peak force generating capabilities across the individual cervical motion segments.

The study is in three parts: a cadaveric dissection to reveal the architecture and morphology of longus capitis and colli; (n = 7), magnetic resonance imaging (MRI) of these muscles in healthy volunteers to measure in vivo muscle volumes (n = 6), and finally biomechanical modeling of the peak force generating capacities based on computed tomography scans of the head and neck.

The results show that bilateral peak flexion torque estimates for longus engagement were higher in the upper cervical spine (0.5 Nm), but weaker and and unlikely to affect motion below the level of C5 (<0.2 Nm). Peak shear estimates were negligible (<20 N), while peak compression estimates were small (<80 N).

These data highlight the complex anatomy and small force capacity of longus capitis and colli, and have implications for the efficacy of their function. In particular, the small peak compression forces indicate that these muscles have a limited capacity to contribute to cervical stability via traditional mechanisms. This implies that the mechanism(s) by which cervicocranial flexion exercises produce clinical benefits is worth exploring further. 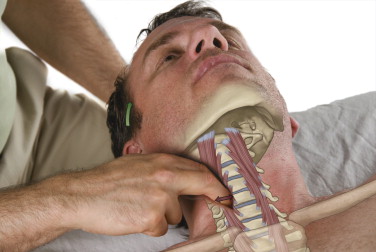 Palpation of the longus musculature on the right side. Permission Joseph E. Muscolino. The Muscle and Bone Palpation Manual – With Trigger Points, Referral Patterns, and Stretching, 2ed. Elsevier, 2016.

The implication of this study seems to be that the longus musculature are weak and therefore likely not of much importance with regard to stabilizing the cervical spine. At least that is what might likely be inferred. However, it is worth noting that there are many small deep postural stabilizer muscles, whose peak torque, if measured, might be fairly small. For example, the interspinales, intertransverarii, and short rotatores. Should we question the importance of these muscles’ as well.

More superficial muscles, by virtue of being superficial and therefore farther from the axis of motion of the joint tend to have greater leverage and therefore create greater torques and are therefore more powerful for motion. Deeper muscles, by virtue of being closer to the joint, tend to have less leverage and therefore generate less force for motion. However, by being closer to the joint, more of the resolution of the vector force of their engagement contributes toward compression stabilization by bringing the joint surfaces closer to each other.

Yes. The longus muscles are not strong and even their compression torque is “weak,” however, there might be more to this picture than simply maximal contractile force generation (to be fair, it should be noted that the research article does conclude that more investigation is necessary to understand the concept of cervical spinal stabilization). Very fine forces are all that are often needed for microadjustments in posture. Further, many smaller deeper stabilization muscles (such as the suboccipital muscles) are richly endowed with proprioceptors for the feedback loop necessary for proper postural stabilization. Perhaps the longus muscles work more in this capacity. Further, the simple presence of the fascia of the longus musculature should not be overlooked given the role of fascia in passive force generation, which can aid in postural stabilization.

As a final note, the fact that studies have shown that the longus muscles are inhibited in patients post whiplash and/or those with chronic neck pain likely shows that were they not inhibited, their contract force would be great enough to add to the compression or other physical stress into the injured joints; otherwise, what reason would the nervous system have to turn off (inhibit) these muscles? My conclusion: Learning to palpate and assess and work the longus musculature is still incredibly valuable and a skill that I teach (with precautions) in my Clinical Orthopedic Manual Therapy (COMT) Certification programs and I believe should be learned by manual therapists.

This interesting study concludes “small peak compression forces indicate that these muscles have a limited capacity to contribute to cervical stability via traditional mechanisms.”
Though conventional approaches often conflate stability with strength, there may be metrics other than strength that can improve our therapeutic outcomes. For instance, what if the neck structures involved contribute more than just brute force? The deep muscles of the anterior cervical spine, like the psoas on the anterior lumbar spine, are extremely sensitive; could it be that they act as length-variable sensors, contributing to stability and adaptability via their rich mechanoreceptor capabilities, maybe even more than they contribute as prime movers?
And, what if stabilization itself is also a function of refined perception and variable adaptability, as much (or more) than it is a function of raw contractile power (which is what the study measures)?
In at least 3 of our Advanced Myofascial Techniques courses (‘Neck, Jaw & Head;’ ’Spine, Ribs & Low Back;’ and ‘WhIplash’), we aim to assess and refine cervical flexion and extension. Flexion is typically more challenging for clients, especially in those of us with tendencies toward head-forward postures etc.; and as the study observes, even more difficult in the lower C-spine than the upper. Whenever neck flexion is difficult, our stated goal is to evoke and refine the participation of these prespinal muscles (which include longus capitis and colli). This might include strengthening, but more often, it involves increasing the client’s awareness of small, nuanced movement options. Such refinement is distinctly different than peak force. And these refined movements are not offered as “contract your longus capitis and colli,” but rather via awareness-based cues such as “Leave your head on the table, and see if you can let the back of your neck lengthen as you look down.”
The authors’ inviting conclusion leaves a door open: that longus colli and capitis may not contribute much force to flexion, they say “implies that the mechanism(s) by which cranio-cervical flexion exercises produce clinical benefits is worth exploring further.” Refined proprioception and more options for subtle adaptability are two such areas that many of us are actively exploring in our practices every day.
Note: This blog post article was created in collaboration with TerraRosa.com.au and Til Luchau.
(Click here for the blog post article: The Unusual Suspects – Longus Colli and Longus Capitis.)
Related Terms: