Note: This is the sixth blog post article in a series of 11 articles on Psoas Major Function. See below for the other articles in this series on psoas major function.

Similar to the hip joint, the spine also allows motion in all three cardinal planes. Therefore the effect of the psoas major must be examined separately in each of these planes. The frontal and transverse plane spinal motions are relatively straight forward, so we will briefly discuss these first. In the next blog post article in this series, we will then tackle the most controversial aspect of psoas major function, its effect upon the spine in the sagittal plane.

Note: Concept of Open-Chain Spinal Motion by the Psoas Major 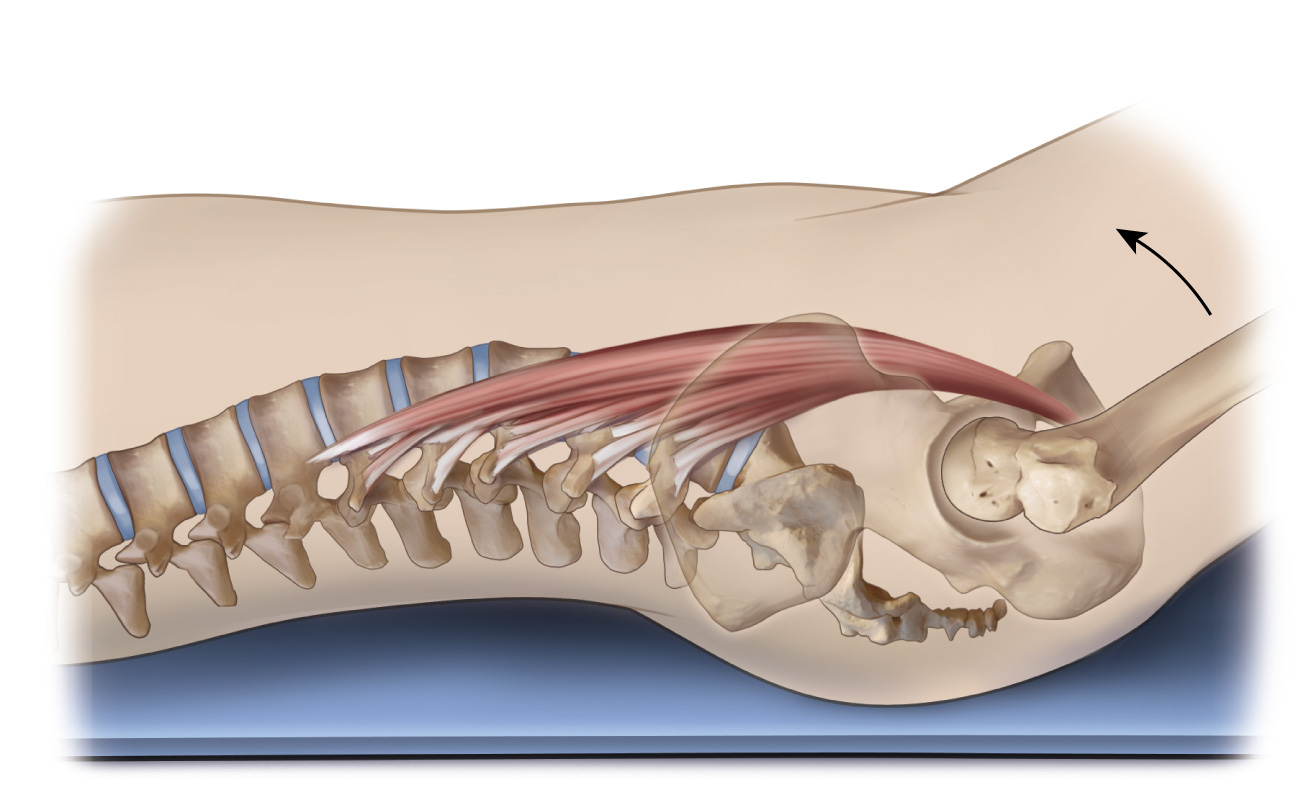 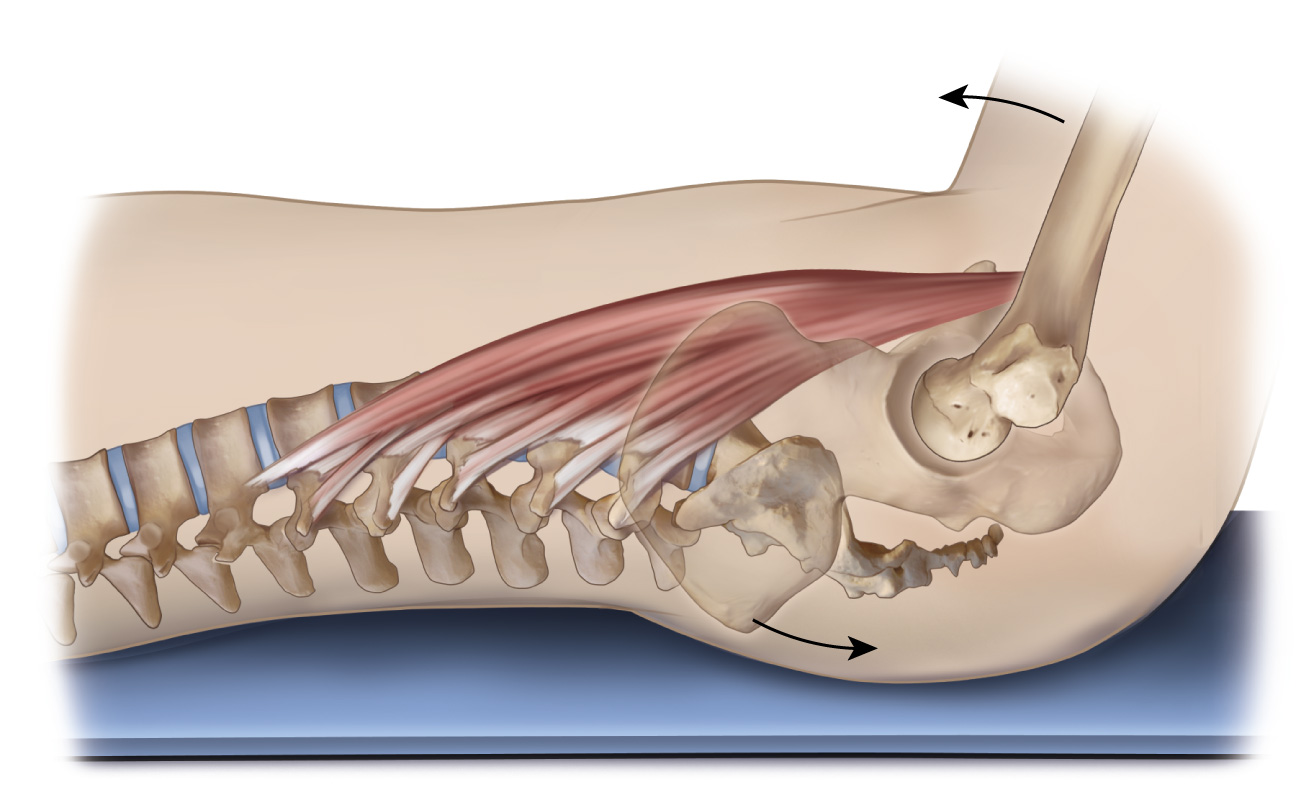 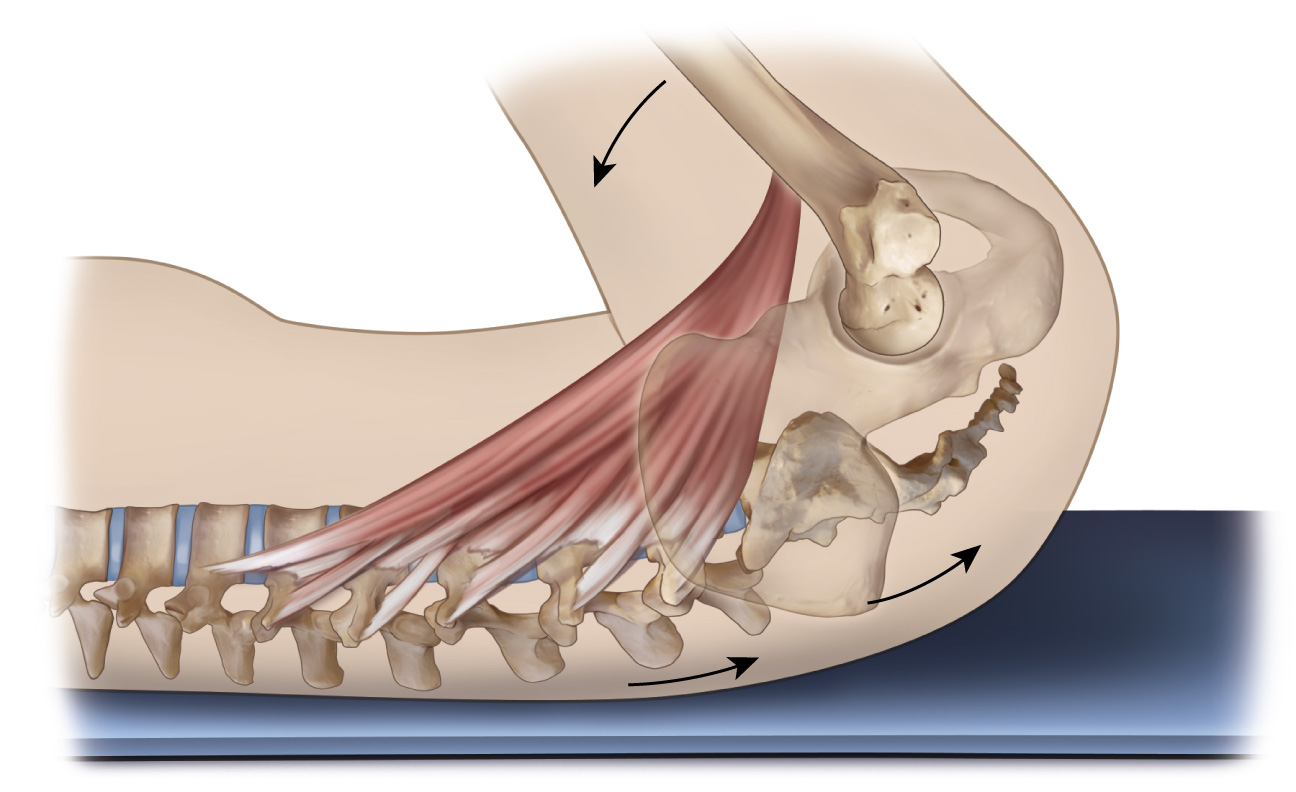 Motions of the spine by the psoas major are usually considered to be closed chain-motion motions because most commonly the (proximal) spine is mobile and moves toward the (distal) thighs, which are fixed. However, it is possible to conceive of the psoas major moving the spine in open-chain position of the lower extremities in which the thighs are the mobile attachments, and the upper spine is the fixed attachment. If, for example, the client is lying supine and contracts the psoas majors bilaterally, the thighs will flex toward the pelvis at the hip joints (Figure A above). As the thighs continue to flex, via the concept of femoropelvic rhythm (14), the pelvis will then begin to posteriorly tilt at the lumbosacral joint (Figure B above). As the thighs continue to flex and the pelvis continues to posteriorly tilt, because the lumbosacral joint only allows a few degrees of motion, the force of the psoas major contraction will continue up into the lumbar spine, sequentially moving each lumbar vertebra into flexion relative to the vertebra that is superior to it (Figure C above). Thus we have the lower lumbar spine mobile and flexing relative to the fixed upper lumbar spine. (Note: These figures courtesy of Joseph E. Muscolino. Art work by Giovanni Rimasti.)

The frontal plane spinal action of the psoas major is fairly clear; it crosses the spinal joints laterally, so unilateral contraction would clearly create a pulling force upon the spine into lateral flexion to that side. This is supported by many sources (3, 5, 7, 15, 19, 20, 23, 25, 30) and can be seen by comparing the line of pull of the muscle relative to the axes of motion located at the center of each disc (Figure 11). Carol Oatis goes so far as to state that the psoas major is an “…effective lateral flexor of the trunk.” (20). However, there are some sources that play down the psoas major’s role in spinal lateral flexion. Shirley Sahrmann states that “…the lateral flexion moments…are small…” and Gray’s Anatomy states that “…electromyography does not support…lateral flexion.” (25, 29). What to conclude? Although the spinal moment arm leverage of the psoas major in the frontal plane is nowhere near as large as more laterally located muscles such as the quadratus lumborum or the lateral fibers of the abdominal wall muscles (external and internal abdominal obliques), given the large physiological cross section of the psoas major it should have sufficient strength to have a moderate or perhaps even strong contribution to lateral flexion motion. 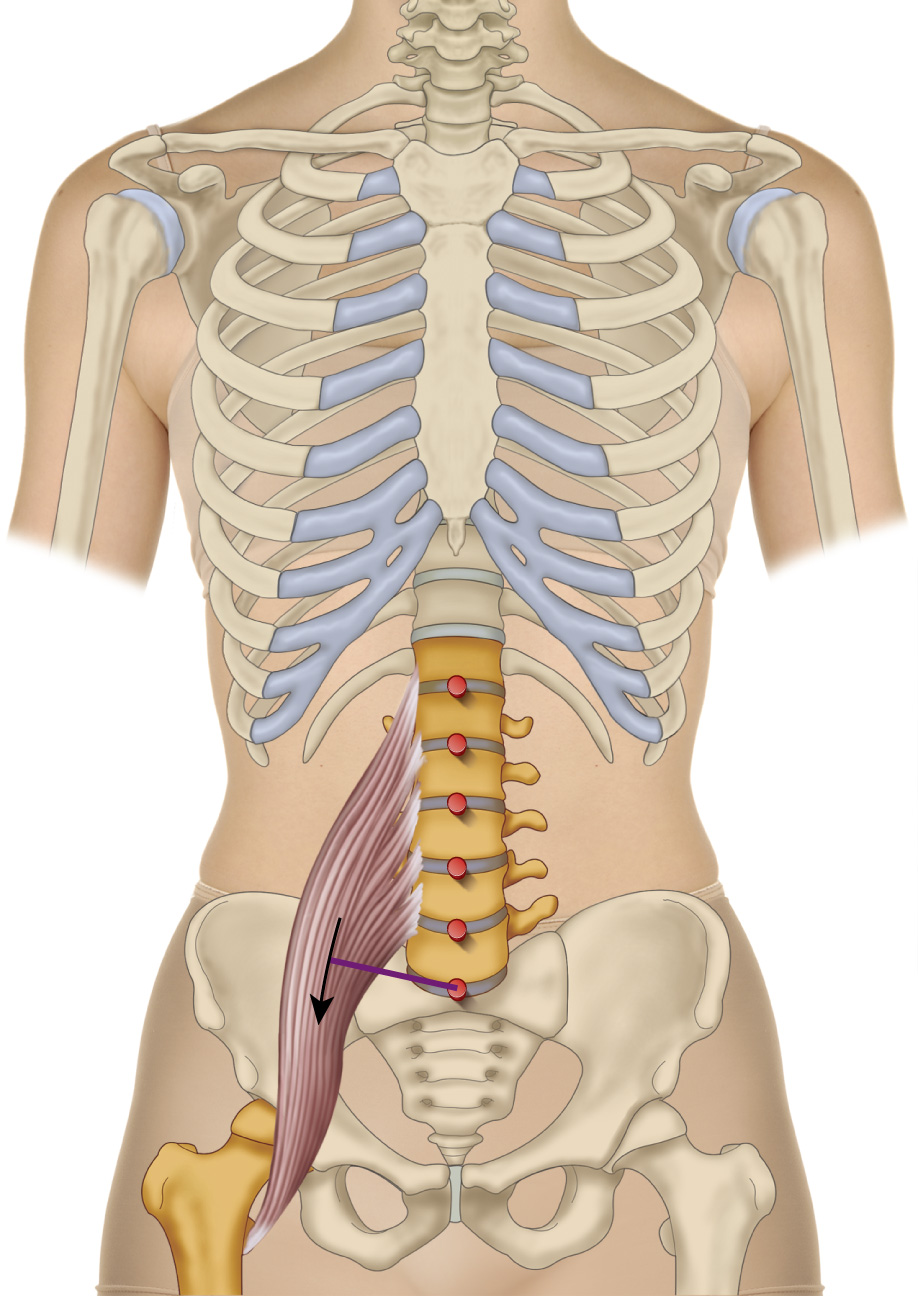 Figure 11. The frontal plane line of pull of the psoas major clearly passes lateral to the anteroposterior axes of motion at the lumbar spinal joints. Note: The axes have been drawn in with red dots, and the moment arm for the L5-S1 joint has been drawn in. Reproduced with kind permission from Joseph E. Muscolino. Modeled from Muscolino, J. E., The Muscular System Manual: The Skeletal Muscles of the Human Body (4th ed.). 2017. Elsevier.

The role of the psoas major in creating spinal motion within the transverse plane does not seem to be strong. Most sources do not even mention its ability to rotate the lumbar spine. Of the few sources who do, it is stated as a contralateral rotator (7, 19). This would fit with the usual reverse action at the hip joint of lateral rotators of the thigh being contralateral rotators of the pelvis (see Figure 10) (14), only instead if contralaterally rotating the pelvis such that its anterior surface comes to face the opposite of the body, the lumbar vertebrae are rotated so that their anterior surfaces come to face the opposite side of the body. Perhaps the reason that the transverse plane motion of the spine is not commonly cited is that its leverage around the vertical axis for spinal rotation is small. Don Neumann states “Little, if any, leverage exists for axial rotation.” (19). However, it is worth adding that even if the psoas major has little leverage to axially rotate the trunk at the lumbar spinal joints, given its lateral rotation ability at the hip joint (discussed previously), its reverse action of contralaterally rotating the pelvis at the hip joint would contribute to turning the trunk to face the opposite side of the body (as long as the trunk stays fixed to the pelvis). In this case, the axis for rotation would be at the hip joint instead of the spine.

Note: This is the sixth blog post article in a series of 11 articles on Psoas Major Function.