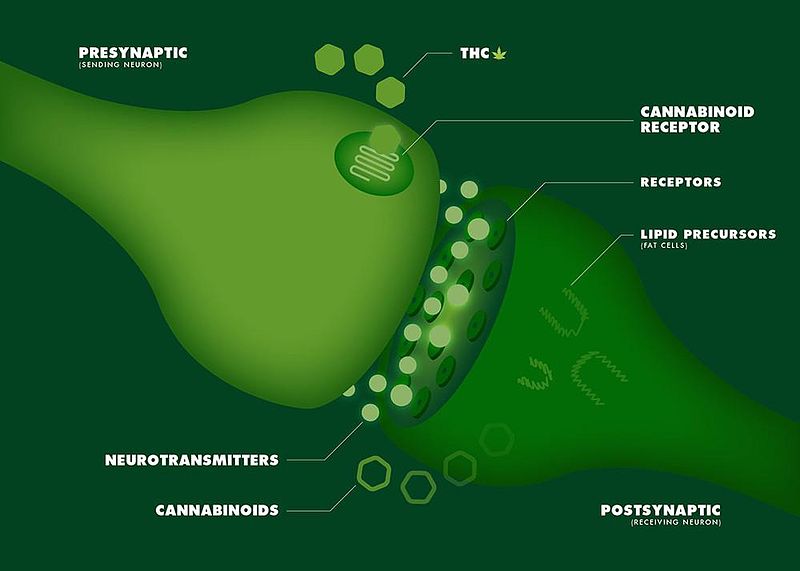 Feeling high after a massage? Receptors for the body’s own cannabinoid substances (endocannabinoids) can be found in fascia according to a recent research study from the Stecco group at the University of Padova in Italy.

Their presence has been stated to exist in myofascial tissue, suggesting that the endocannabinoid system may help resolve myofascial trigger points. However, the expression of endocannabinoid receptors in human fascia has not yet been confirmed. This study published in the European Journal of Histochemistry, is the first study to establish their presence in fascial tissue.

The researchers extracted fascia latae tissue, the deep fascia that encircles the thigh (of which the iliotibial band is a thickening in the lateral thigh), from 11 volunteers who had orthopedic surgery, and then isolated the main cell type of the fascia, called fibroblasts. They found both types of receptors, CB1 and CB2, in these cells.

The authors stated: “The presence of CB1 and CB2 receptors in fascial fibroblasts suggests their possible role in modulation of fascial pain. The fascial pain is usually related to a fascial inflammation and/or a fascial fibrosis, and both could be related to an alteration of the endocannabinoid system. Indeed the activation of CB1 and CB2 receptors is able to suppress pro-inflammatory cytokines such as IL-1beta e TNF-alpha and to increase anti-inflammatory cytokines, and provide an anti-fibrotic activity. ”

The authors also hypothesised a possibility that the endocannabinoid system inside the deep fasciae is stimulated during manipulative treatments and exercises. A previous study by McPartland et al. demonstrated that after osteopathic manipulation treatment, the serum level of anandamide (a type of neurotransmitter considered to be an endocannabinoid) increases 168% over pre-treatment levels. And Gamelin et al. demonstrated that regular exercise is able to modify the tissue levels of endocannabinoids.

The authors added that “It is also known that the connective tissue is one of the principal targets of stretching, causing the remodelling of the cytoskeleton of the fibroblasts and a modulation of the inflammation-regulation mechanisms within connective tissue. Consequently, we can suppose that specific exercises or fascial treatments would be able to stimulate the fascial fibroblasts and consequently to modulate the endocannabinoid system and the release of anti-inflammatory cytokines.”

This blog post article was created in collaboration with TerraRosa.com.au.

(Click here for a blog post article on Effect of Stretching on Fascial Injury and Movement Restriction.)