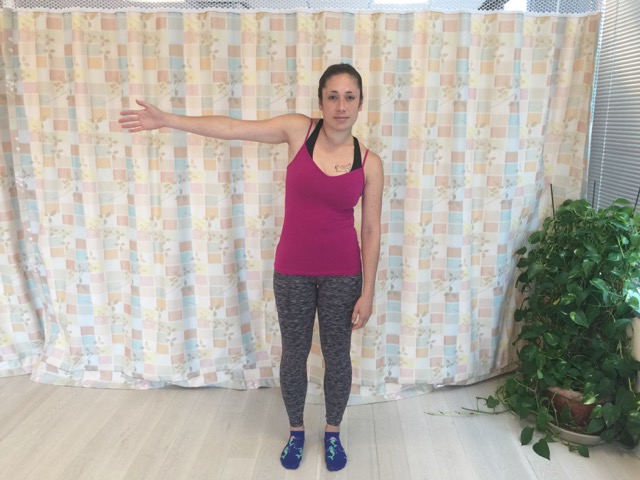 Self-care for the client/patient with frozen shoulder: 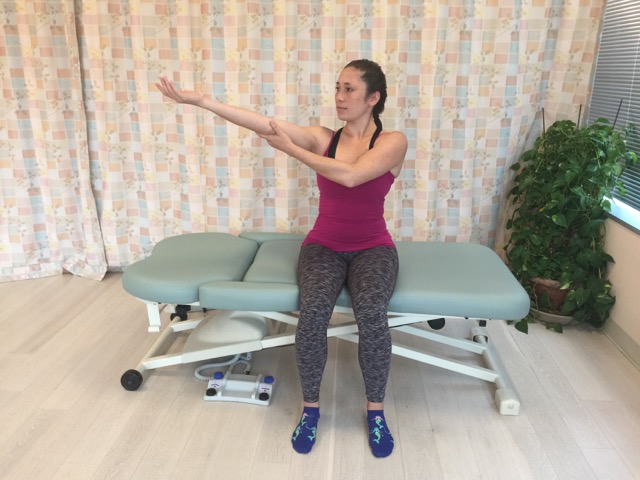 Self-care for the client/patient with frozen shoulder is very important. Recommend stretching at home or work as many times as possible, with a minimum of three times per day. If possible, the stretching should be done after the shoulder is warmed up with some form of heat, preferably moist heat. An extremely effective and easy self-care stretch is performed against the wall. Have the client/patient stand away from the wall and place their fingers on the wall. They should then gradually “walk” their fingers up the wall or up and out to the side on the wall, going as high as they can. Over time, as they progress, instruct them to gradually stand closer to the wall. It can be helpful for them to mark in pencil how high they have reached with the date that mark was reached, with a goal of gradually increasing the excursion of their movement each day or so. If a wall is not available, a simple stretch for limited glenohumeral joint abduction is to use the other hand to lift the arm into abduction (perhaps with a little flexion given that the arm will be in front of the body).

The medical approach to frozen shoulder is essentially manual therapy; most physicians refer patients with frozen shoulder to a physical therapist for care. For more marked cases, manipulation under anesthesia may be done. For severe cases that have not responded to manual therapy, surgery can be done.

Kalinda is a 27-year-old volunteer librarian who recently helped reorganize the library one weekend. This entailed doing a lot of lifting and moving of books. Afterward, her right shoulder was sore and painful. The pain lasted about a week. When the pain passed, her shoulder felt stiff and it was hard reaching for things. But she could still do most of her activities of daily life without too much difficulty, so she ignored it. Also, she was glad that the pain was gone and she figured that her shoulder would gradually get better and loosen up. However, as the weeks passed, she noticed that not only was the stiffness not improving; it was slowly getting worse. By the time two months had passed, she was having difficultly moving her shoulder in most directions and she finally recognized that that she had a problem. She went to her medical doctor who took X-rays and diagnosed her with frozen shoulder and recommended that she go to physical therapy. Because she once had a bad experience with physical therapy, she decided instead to see a clinical orthopedic manual therapist who had helped her with another problem years ago.

The therapist performed active and passive range of motion (ROM) examination of her right and left shoulders. The motion on the left side was full and healthy. With both active and passive ROM on the right side, she was able to abduct only to 20 degrees, flex to 30 degrees, and laterally rotate to 30 degrees. She had no pain at rest and no pain during her active ROM; she simply was unable to move farther. The only time she felt pain was if the therapist tried to passively move her into abduction, flexion, or lateral rotation beyond her limits. No swelling was noted. All musculature around her right shoulder joint was mildly to moderately tight, but the most tightness and trigger points were found in her subscapularis, posterior deltoid, and teres major. Joint mobilization assessment (motion palpation) revealed a decrease in inferior and anterior glide motions. Orthopedic assessment tests for thoracic outlet syndrome and a space-occupying lesion in the neck were negative.

Given the assessment of frozen shoulder, the therapist recommended to begin with three one-hour massages per week for three weeks. Each session consisted of the treatment regimen for frozen shoulder that was recommended in an earlier blog in this series. Namely, light to medium work to warm up the right shoulder girdle and upper extremity, followed by deeper work to the myofascial trigger points and tight musculature found. Moist heat was applied for five minutes and then stretching was done, including contract relax (CR) and agonist contract (AC) stretching techniques. The therapist then performed joint mobilization (arthrofascial stretching) to the client’s right shoulder, followed by another three sets of stretching to the shoulder. At the end of this care, because some very deep work was done to the posterior shoulder region, the therapist elected to ice the client for five minutes before the end of the session. Kalinda was also given self-care instructions. She was told to apply moist heat to her shoulder followed by the wall stretch and asked to do this at least three times per day. She was also instructed to try to use her right arm in everyday life as much as possible.

At the end of three weeks, lateral rotation had returned fully, her abduction was 100 degrees, and her flexion was 120 degrees. The therapist recommended continuing at a pace of twice per week. After four more weeks of care, Kalinda was only missing 10-15 degrees of abduction and flexion. The therapist recommended continuing care at twice per week until a full 180 degrees of motion had been returned to both RsOM, however, Kalinda felt that money was getting tight and that she had achieved sufficient improvement, so she decided to wean down her care. She and the therapist discussed the treatment plan and it was decided to gradually wean the care until she was coming in once per month. Kalinda agreed to continue care at once per month on a regular basis to prevent the condition from regressing. Kalinda also continued with her self-care exercises.