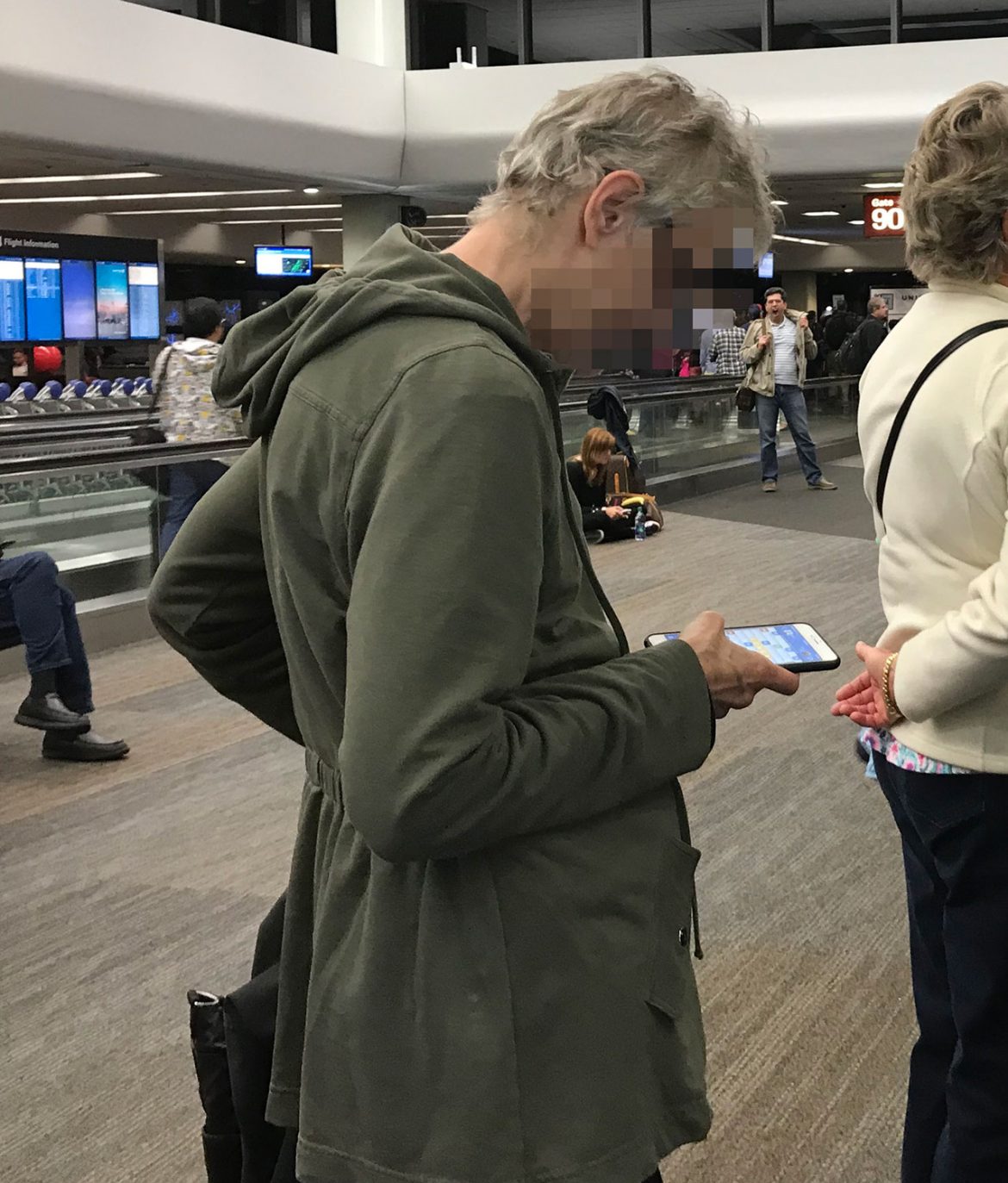 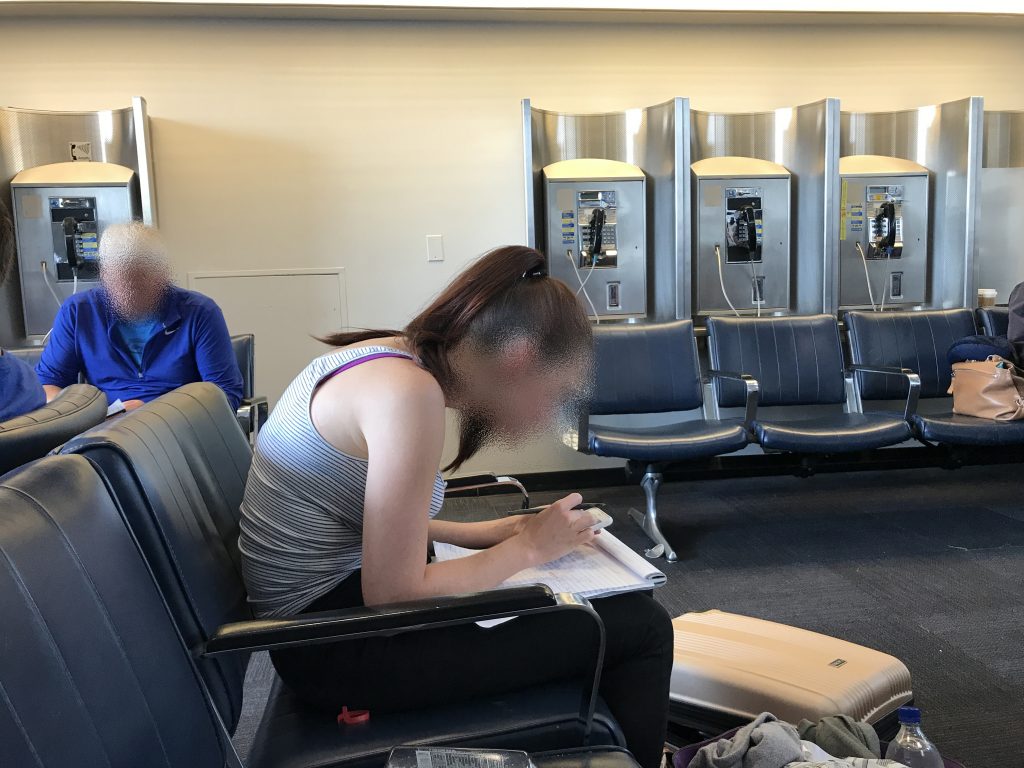 In a previous blog article, I discussed how we should not draw a conclusion from a survey taken from a snapshot in time on the relationship between text neck posture and neck pain, especially if the survey is on young adults. Here we look at two survey studies on young adults. The Australian study is a survey at one point in time, while the Swedish study has a 1-year and 5-year follow up survey.

As many people, including myself, have pointed out, there is nothing new in “text neck” posture. Indeed, the forward flexed posture of the cervicocranial region that is emblematic of text neck, was a problem long before digital devices existed. We just need to look at the typical posture of someone reading a good old-fashioned paper book or magazine, or someone bent over a desk writing on a piece of paper, or for that matter, anyone doing anything down in front of them, which are most all tasks in the industrialized world, whether it is cutting vegetables or tending to a baby. The difference, in my opinion, is the tremendous increase in time spent in this text neck posture due to the tremendous amount of time that we now spend on our digital devices, especially the younger generation. I do not have all the stats at my fingertips for the exact amount of time difference between then and now, but I know that I have read stats about current digital device use that tops out for many people at well over four hours per day, and I one stat I read for reading on paper back in 2005 was only 45 minutes per day. Quite a difference! Of course these stats will vary from person to person, but they give us an idea of the effect of digital devices on our society as a whole!

The point is, digital devices are not the enemy, it is the tremendous amount of time that we spend in the forward flexed poor craniocervical (head/neck) posture using them that is the enemy!

(BTW, I would make the argument that desktop computer use probably affords the best chance of having healthy ergonomic posture of any means of reading and writing, whether it is with paper or digital devices. See the link that follows for the article on this.)

(Click here for a blog post article on “Reading, Writing, and Posture”, an article that compares the postures with everything from reading paper, writing on paper, and using smart phones, tablets, laptops, and desktop computers.) 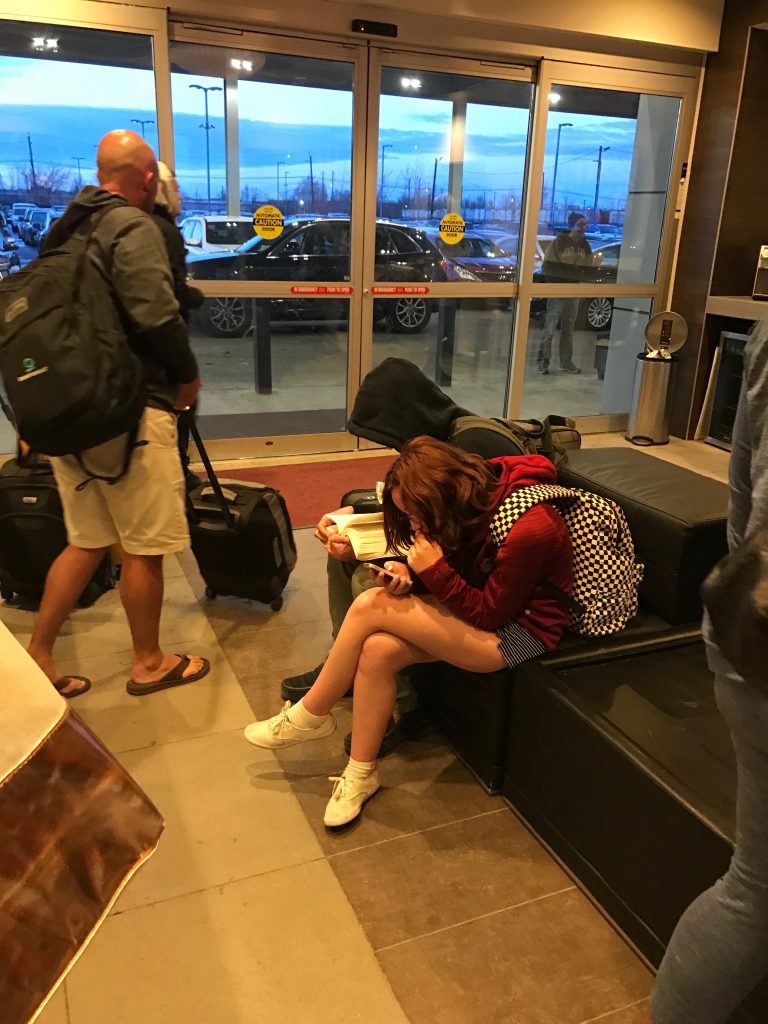 “Text Neck Posture” with both digital device AND paper. But how many hours do we now spend with digital devices compared to hours spent in the past with paper? Permission Joseph E. Muscolino. www.learnmuscles.com.

The Australian study is often cited as the proof that there is no correlation between text neck posture and pain. The study published in 2016 by researchers from Curtin University in Western Australia, conducted a survey of 17-year-olds. 1,108 adolescents were assessed for their posture in a sitting position by photograph. One distance and four angular measurements of the head, neck, and thorax were calculated from photo-reflective markers placed on bony landmarks. The sagittal sitting neck postures were then grouped based on their similarity. Height and weight were measured, and lifestyle and psychological factors, neck pain, and headache were assessed by questionnaire. 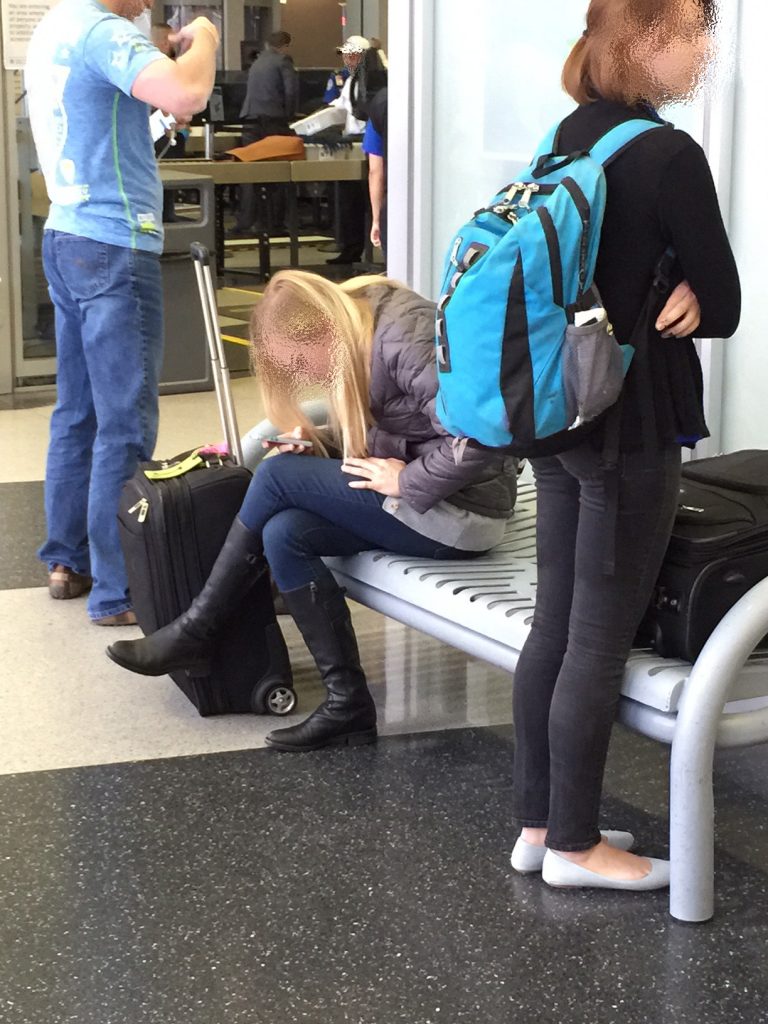 The photographic analysis identified four distinct groups of sitting text neck posture: upright, intermediate, erect thorax/forward head, and slumped thorax/forward head. Data showed that this grouping is associated with sex, weight, and height. Participants classified as having slumped thorax/forward head posture were at higher odds of mild, moderate, or severe depression. Participants classified as having upright posture exercised more frequently. However, there was no significant difference in the occurrence of neck pain or headache across the groups.

The authors concluded that there is no association between text neck posture and neck pain and headaches, which “challenges widely held beliefs about the role of posture in adolescent neck pain”.

As I wrote in the previous blog post article on text neck posture and neck pain in young adults (see link to that blog post article earlier in this blog post), pain is often the result of long-standing repetitive overuse, so to speak, of bad posture. Just as it is unlikely that a young adult who smokes cigarettes would experience lung cancer or any of the other deleterious effects of smoking when still young, it is also unlikely that a young adult would experience any of the deleterious effects of postural distortion patterns, whether it is text neck or any other postural distortion pattern. So can we say that there is no link between text neck posture and neck pain in young adults? Yes. But can we say that text neck posture is therefore healthy? NO! If mechanics matter at all (and unfortunately, some people take the wonderful tenets of “pain science” too far and conclude that pain science is everything and that pathomechanics do not matter at all), and I strongly believe that mechanics do matter, that forces into tissues do matter; then there will have to be some price to pay, somewhere down the road, for the increased chronic repetitive asymmetrical forces into our soft and hard tissues. Even if the price is not direct pain, it will be in tissue adaption dysfunction.

But there was a correlation found between text neck posture and depression… So does that mean that pathomechanics do not matter for pain, but they do matter for depression…???

I am fond of using the term “neuro-myo-fascio-skeletal” in place of “musculoskeletal” or “myofascial” because I want to give due respect to muscles, bones, fascia, and the nervous system. When therapists omit the tremendous importance of the mind (nervous system) to the functioning of the mind-body complex, I always find it lamentable. But I feel similarly when therapists try to exclude the tremendous importance of mechanics to the mind-body complex! Let’s be inclusive with our ideology, not exclusive. 🙂 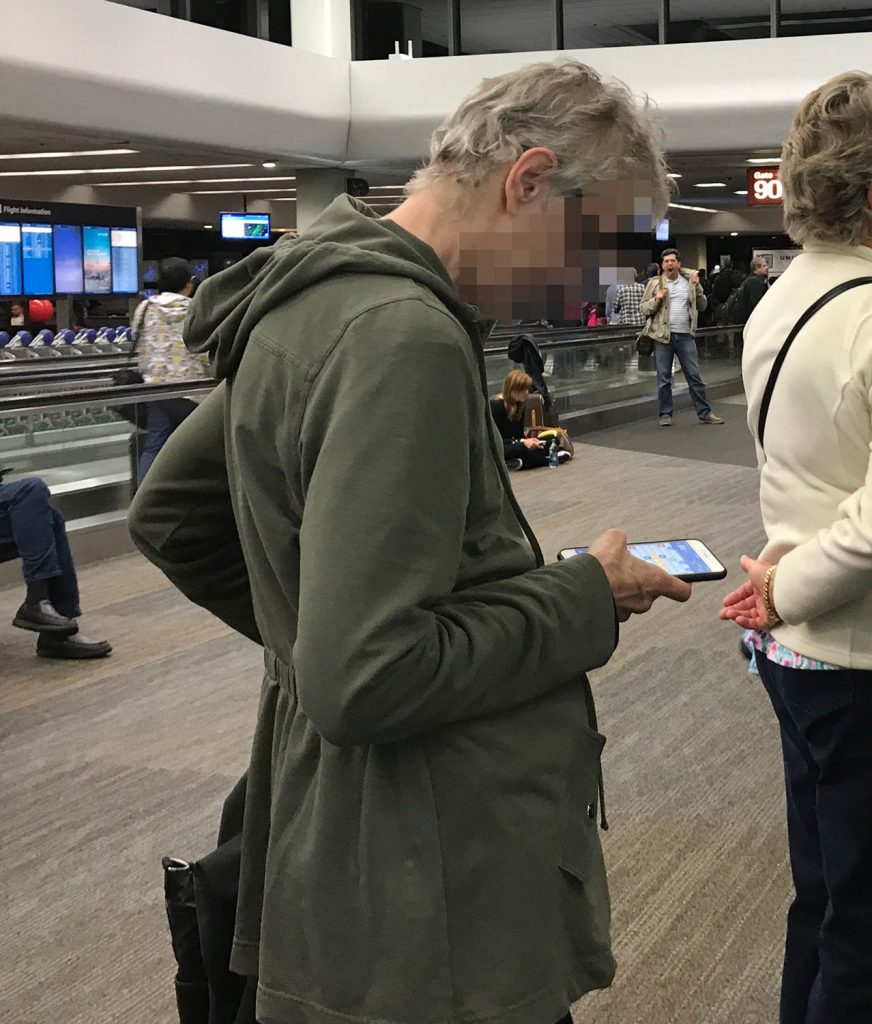 It is not only the young who employ “text neck posture”. Permission Joseph E. Muscolino. www.learnmuscles.com.

A less well-publicized article is a Swedish study, which studied the impact of texting on smart phones on musculoskeletal pain in young adults for a period of five years. Swedish young adults (aged 20–24 years) were recruited via a web-based questionnaire at baseline (n = 7092) and the survey was repeated after one and five years. The study found associations between text messaging and reported ongoing symptoms in neck and upper extremities.

Among symptom-free participants at the beginning of the study (baseline), associations were only found between text messaging and new cases of reported symptoms in the hand/fingers at one year follow up.

Among those with symptoms at baseline, associations were found between texting and maintained pain in neck/upper back.

The authors indicated that the results imply mostly short-term effects, and to a lesser extent, long-term effects on musculoskeletal disorders in neck and upper extremities.

The Swedish study was started in 2007 and only looked at SMS/texting. With the proliferation of smart phones in more recent years, the amount of time spent on smart phones is likely to be increased. The study only recorded the frequency of texting and did not look at posture. Nevertheless, their past study noted differences in posture, typing style, and muscle activity while texting on the phone between those with and without musculoskeletal symptoms in neck and upper extremities.

For those who need an evidence-based study, a systematic review published in 2017 evaluated ten studies and showed that the prevalence of neck complaints among smart phone device users ranges from 17% to 68%. The prevalence to lower back and upper extremities complaints ranges from 1% to 70%. This study also finds some evidence for neck flexion, frequency of phone calls, texting and gaming in relation to musculoskeletal complaints among mobile device users. 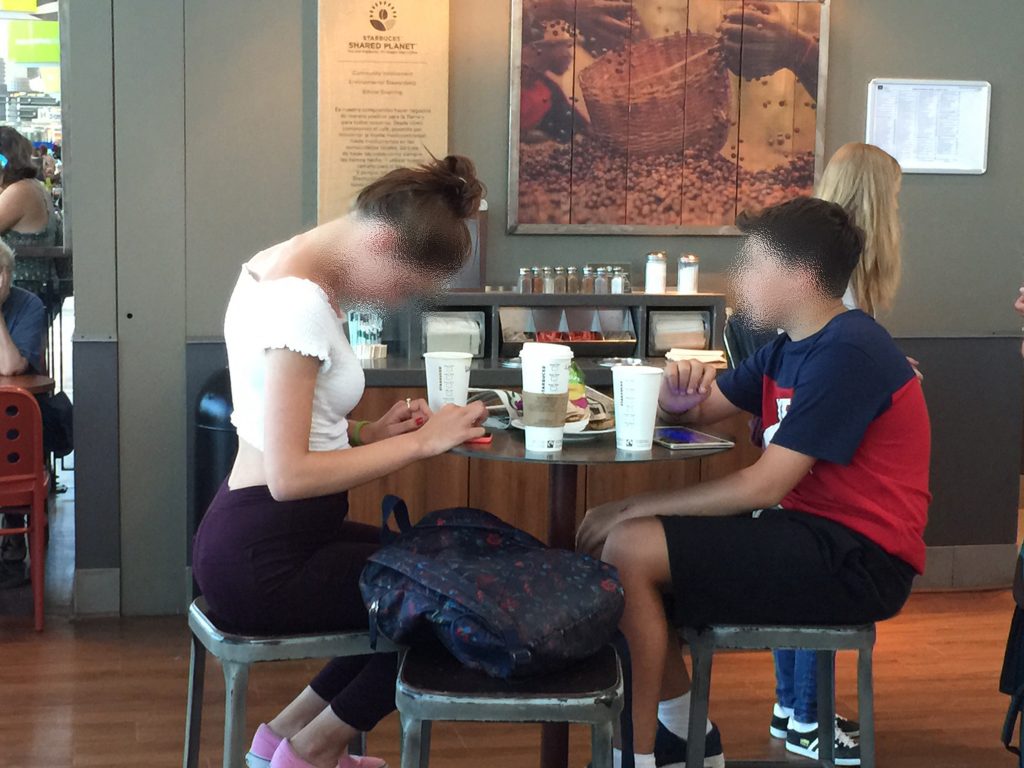 Text Neck Posture. How could this posture not lead to some type of pain and/or dysfunction? Permission Joseph E. Muscolino. www.learnmuscles.com.

I will re-state that with any imbalanced posture (postural distortion pattern), including text neck posture, there has to be asymmetrical forces placed on the tissues of the body. These forces have to have an effect. Even if (that is a big IF), there is no pain directly associated with the postural distortion, then there will have to be tissue adaptations: soft tissue shortening on one side of a joint, and lengthening on the other side. This has to lead to muscular tonicity changes (inhibition/facilitation changes) and fibrous adhesions formed, and concomitant changes in flexibility, both of extra-articular myofascial tissues and intra-articular (intrinsic “within the joint” fascial) tissues. If flexibility changes, then movement function changes, and this is at the heart of musculoskeletal (better termed: neuro-myo-fascio-skeletal) dysfunction. So even if a pain science advocate were to argue that pathomechanics do not lead to pain (and I concur that pathomechanics might not lead to pain, but I believe that they certainly are a predisposition to pain and WILL LIKELY lead to pain down the road), then I think it is impossible to argue that pathomechanics do not lead to dysfunction.