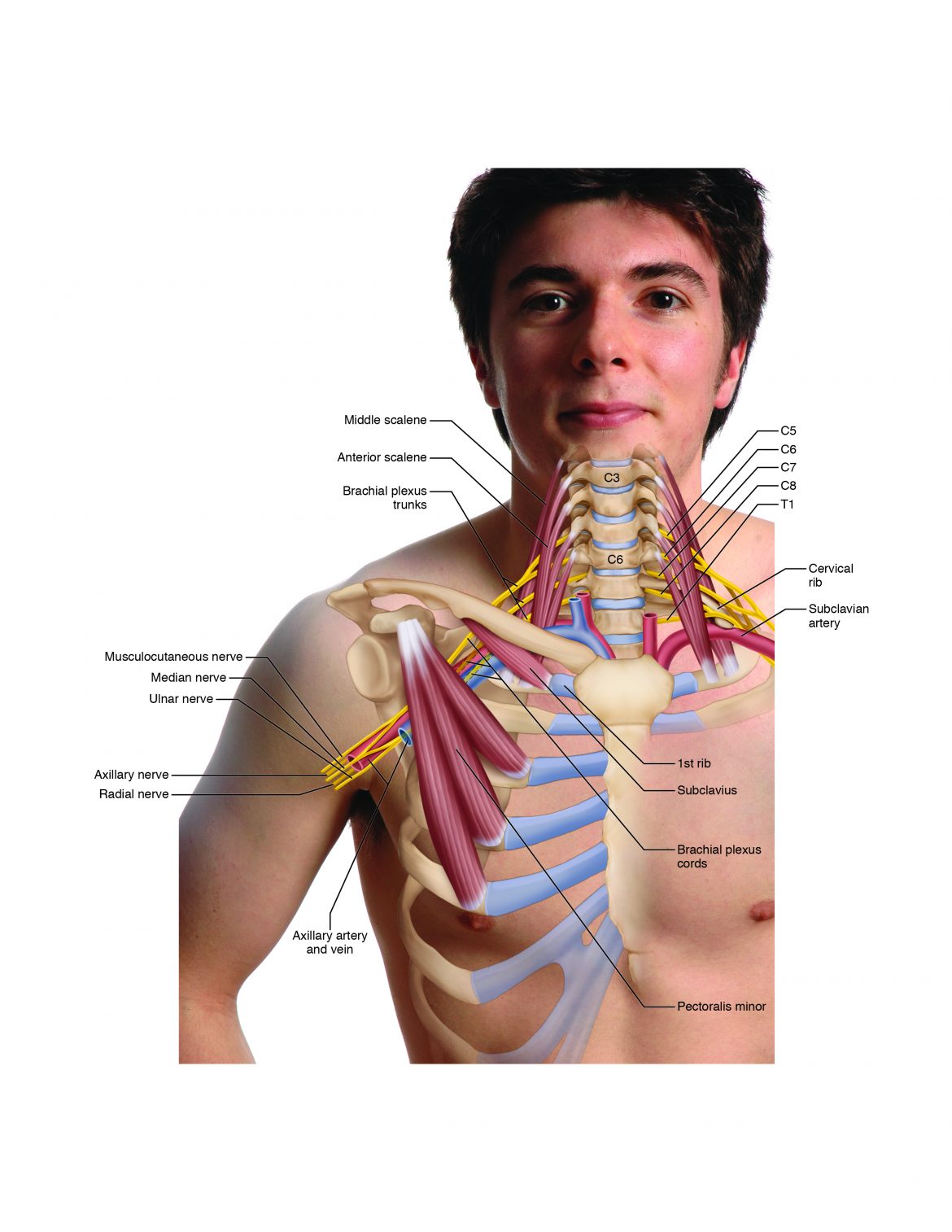 Thoracic outlet syndrome (TOS) is a condition that causes compression of the brachial plexus and/or the subclavian/axillary artery and vein blood vessels where the thorax outlets into the upper extremity. This region is located in the lower neck/chest/axillary area (Fig. 18). 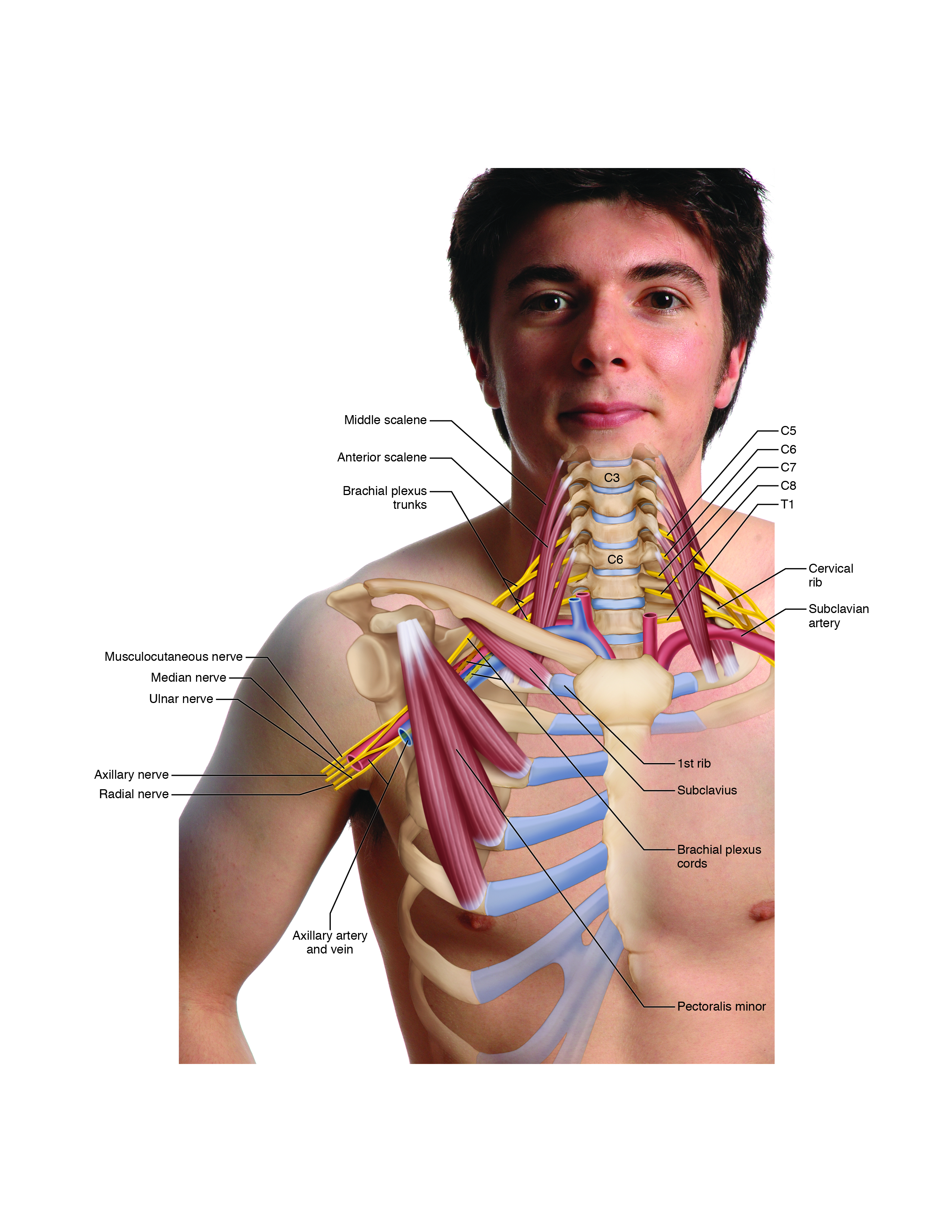 There are four major types of TOS, each one named for the location of the neurovascular compression:

For Adson’s, Eden’s, and Wright’s, the test is considered positive if the strength of the radial pulse diminishes and/or if the client reports paresthesia symptoms into the upper extremity.

When a cervical rib is present (a genetic anomaly found in approximately 1 in 100 people) causing TOS, Adson’s test will usually show positive. Definitive assessment/diagnosis of a cervical rib is done by X-ray. 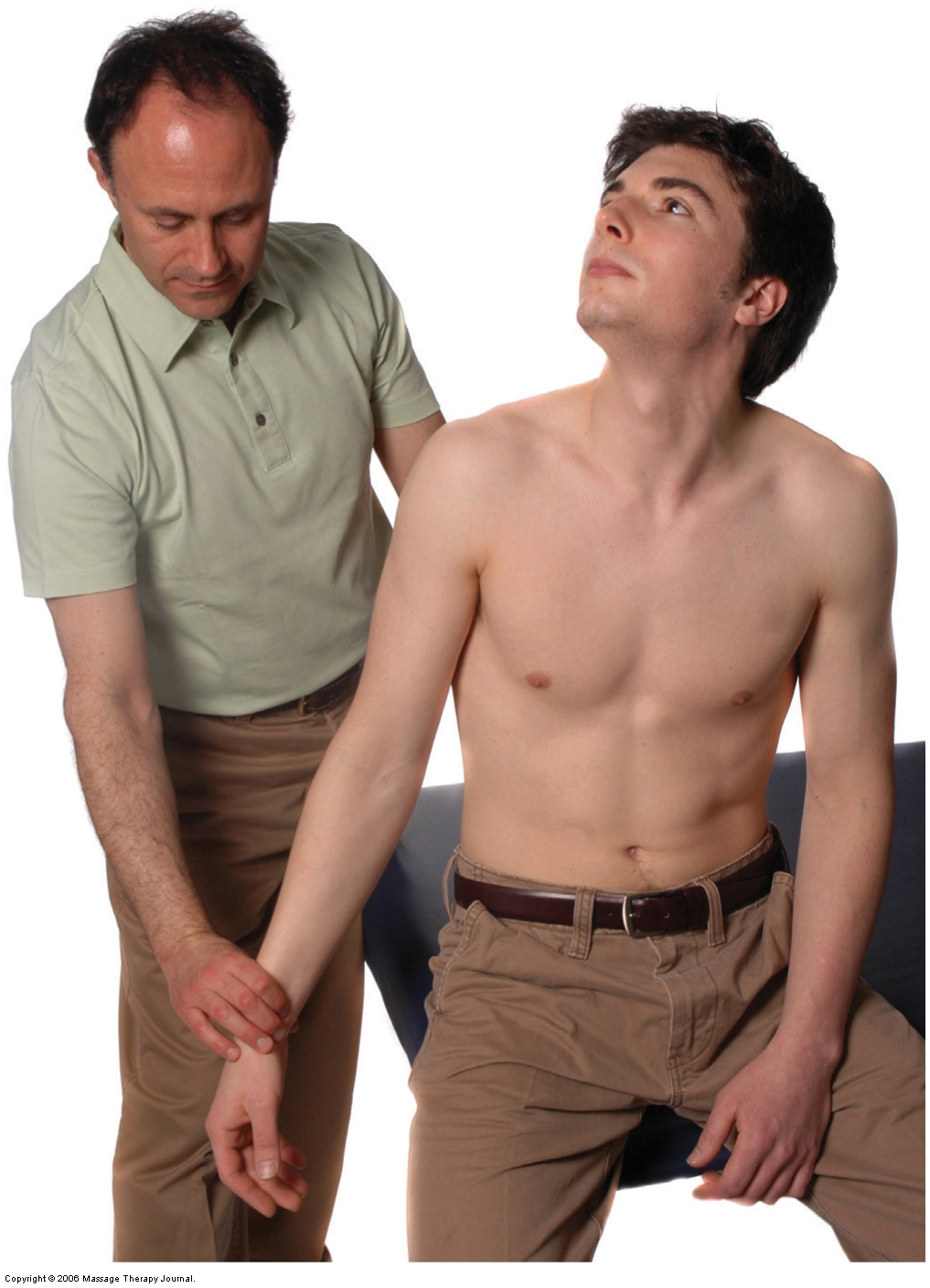 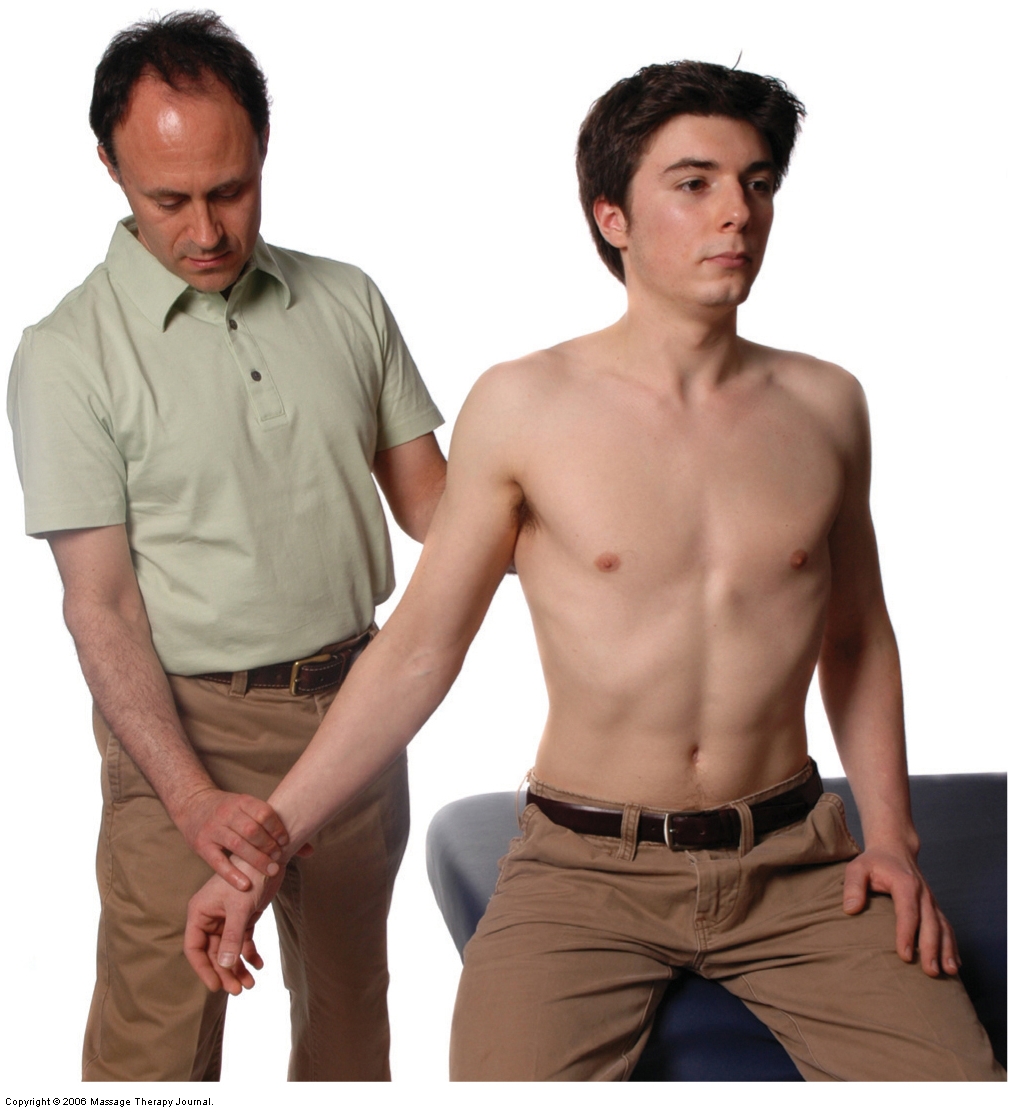 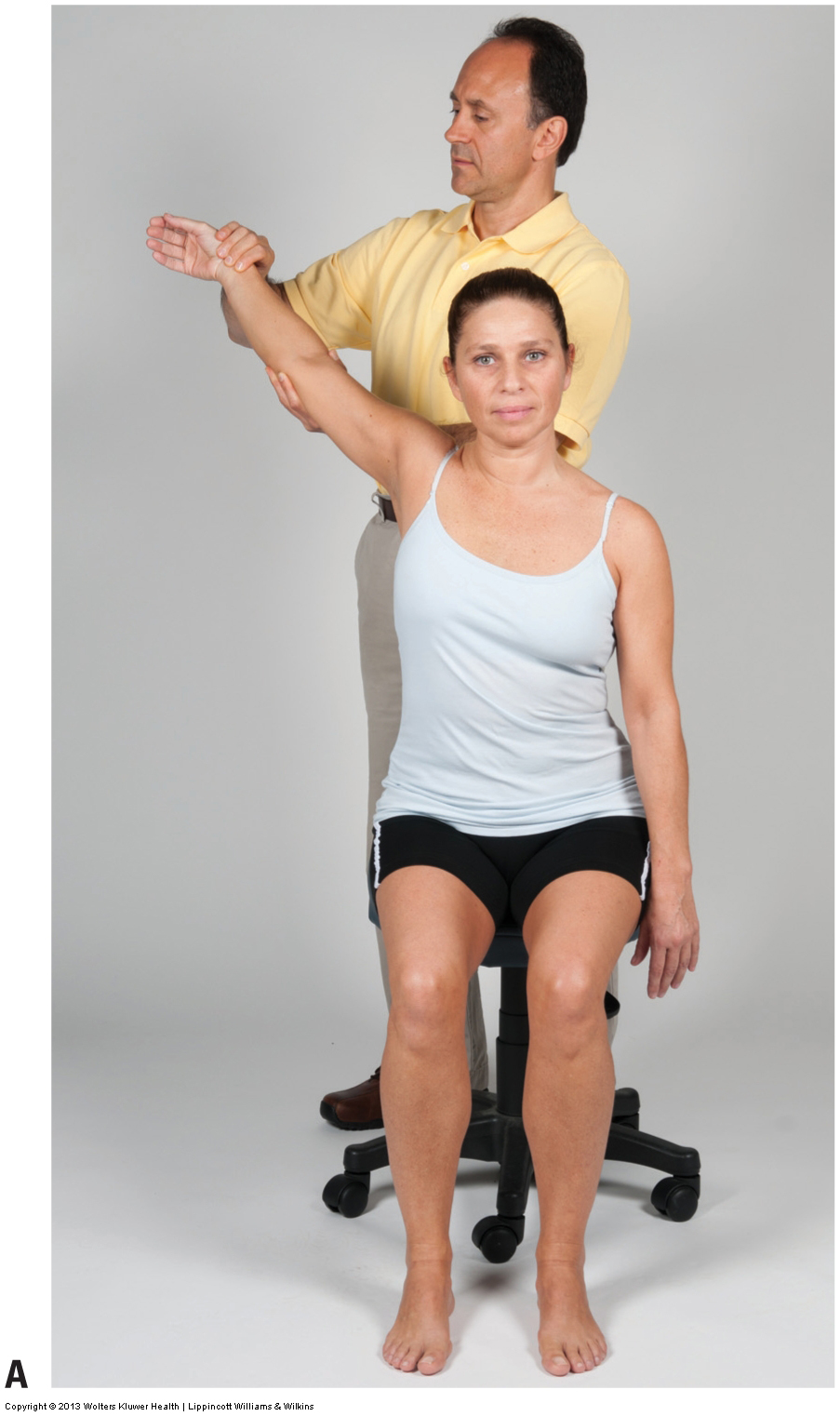 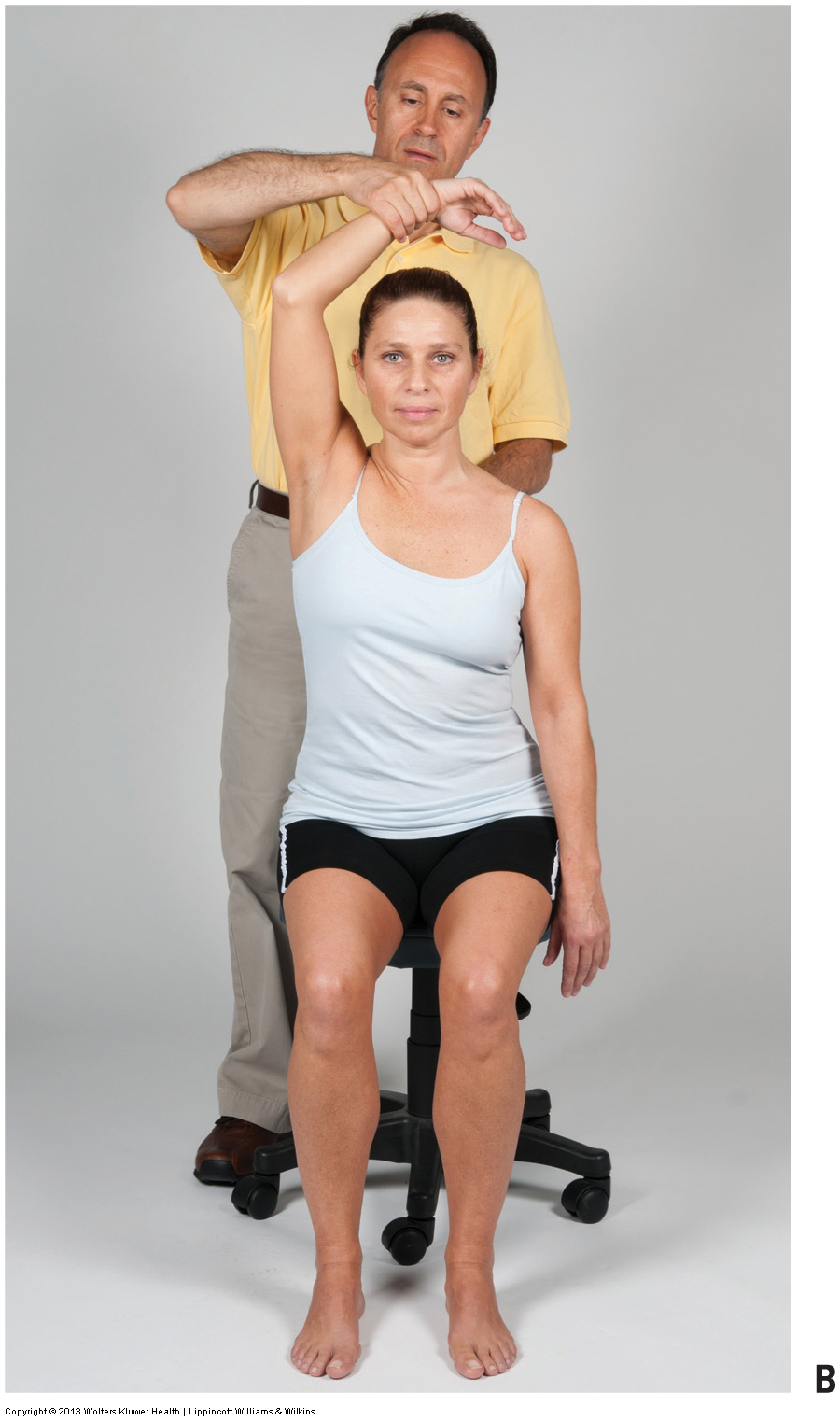 Costoclavicular syndrome involves compression between the clavicle and first rib, the region known as the costoclavicular space. Costoclavicular syndrome results from poor posture known as the upper crossed syndrome, in which the client’s upper trunk/spine rounds forward and down into flexion, the shoulder girdles round forward into protraction, and the arms medially/internally rotate at the glenohumeral joints (note: upper crossed syndrome usually results in dueling locked short – locked long opposing groups of musculature). This posture is usually the result of tight scapular protractors (pectoralis major and minor), weakened scapular retractors (rhomboids and trapezius, especially the middle trapezius), and weakened upper back extensors (erector spinae and semispinalis). This posture causes the clavicle to fall forward and down against the first rib, closing down on the costoclavicular space and compressing the neurovascular structures located there. Costoclavicular syndrome may also occur if the subclavius, anterior scalene, and/or middle scalene muscles become tight and pull the first rib up against the clavicle. Another factor that can cause or contribute to this condition is a bony callus on the clavicle secondary to its having been fractured.

The presence of an anatomic anomaly called a cervical rib can also cause neurovascular compression characteristic of TOS. A cervical rib is usually a small bone that forms off of C7. Its location may cause impingement on the brachial plexus, usually between the anterior and middle scalenes. Cervical ribs occur in approximately 1% of the population.

Massage and stretching can be extremely beneficial in helping to decrease muscular tightness and spasms associated with TOS. When working the anterior neck for anterior scalene syndrome, there are precautions and contraindications to consider given the number of sensitive structures present.

Moist heat before stretching is also valuable. Strengthening the extensors of the thoracic spine and retractors of the shoulder girdles is also extremely important.

(Note: For more on the Thoracic Spine, click here.)

Note: This blog post article is the seventh in a series of 10 posts on