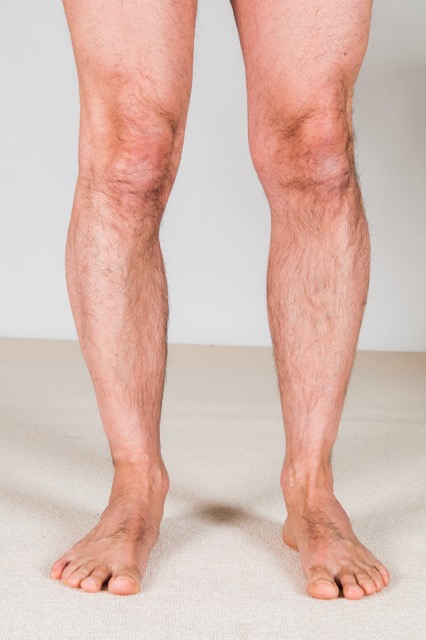 Kerrati is a 36-year-old manager who works at a retail store. She came in for wellness massage, but during the postural examination, the therapist noticed that Kerrati’s right arch drops markedly upon weight bearing. Further, her right lower extremity is rotated medially compared to her left side, as evidenced by visual inspection of her patellae. And her right iliac crest is low and she has a mild lumbar scoliosis (convexity to the right). Kerrati does not report experiencing any pain anywhere in her body.

After finding the overpronation, the therapist performed a palpatory exam and found tightness in Kerrati’s plantar foot as well as myofascial trigger points in Kerrati’s right-sided tibialis anterior, fibularis longus, gluteus medius, upper gluteus maximus, and piriformis. Tightness was also found in the musculature (erector spinae, transversospinalis, and quadratus lumborum) in the concavity of the scoliosis in her left low back. With palpation into these areas, Kerrati experienced tenderness and mild pain. The therapist also performed motion palpation assessment of the tarsal and metatarsal bones on the plantar side of the foot, and found restricted motion generally for the right foot compared to the left. Range of motion examination showed slightly decreased inversion of the right foot.

Given the assessment of overpronation of Kerrati’s right foot, along with the dropped iliac crest and compensatory scoliosis, the therapist recommended two one-hour massages per week for four weeks and one one-hour massage per week for the following four weeks. The therapist also referred the Kerrati out to a fitness trainer with the request that the fitness trainer pay specific focus on strengthening all the musculature that supports the arch structure of the foot.

With the client supine, soft tissue manipulation (massage) was performed for the anterior and lateral compartments of the leg for approximately 5-10 minutes, gradually transitioning from mild to deeper pressure. The client was then turned prone and soft tissue manipulation was performed for the posterior compartment of the leg for approximately 5 minutes, again gradually transitioning from mild to deeper pressure to access the deep musculature on the posterior side. This was followed by moist heat to the plantar foot and posterior leg for an additional 10-15 minutes while the therapist worked Kerrati’s hip joint lateral rotation and abduction musculature, as well as the lumbar spine musculature.

Each session was carried out in a similar manner, with increasing depth of pressure and assertiveness of stretching and joint mobilization as Kerrati gradually improved. Kerrati was given self-care stretches for the deep lateral rotators of the hip joint as well as her low back; and she was told to perform these stretches two to three times per day after hot shower or other form of moist heat application. She was also recommended to perform the towel scrunching exercise to strengthen the intrinsic musculature of her foot. Finally, proper posture at work and home was discussed, including the recommendation to find shoes that have better arch support.

At the end of eight weeks, Kerrati’s tarsal and metatarsal bones/joints were much more mobile, and many of the myofascial trigger points in her leg, buttock, and low back were improved. Further, her tenderness in these regions was diminished approximately 80%. Kerrati is still working with her trainer and her trainer is reporting that the strength of the targeted muscles is improving nicely.

For proactive self-care with the goal of continuing to improve the overpronation of her right foot, Kerrati continues to receive clinical orthopedic massage once or twice each month and continues to work out with her trainer twice per week. Whether this plan will be successful toward entirely resolving her overpronation will take many months to determine. However, catching this condition relatively early bodes well for improvement and was critically important to stop the compensatory postural changes above.